This type of
thunderstorm, sometimes called pulse or airmass thunderstorm, are typically
small weak thunderstorms, that don’t last very long usually lasting 20-30 minutes.
They typically form due to summertime heating during the afternoon. as the name
implies, this kind of thunderstorm has only one cell with a one-time updraft
and one-time downdraft. Single-cell thunderstorms may produce brief heavy rain
and lightning. Single cell thunderstorms typically don’t become severe.  But if they do, they can cause microburst,
small to moderate size hail, straight-line wind damage, and even weak
tornadoes. 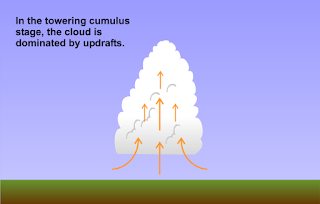 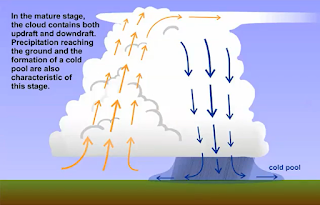 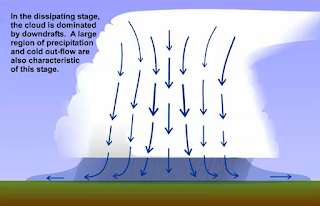 Sometimes if
the atmospheric conditions are supportive, the potential is there for more than
just a single cell thunderstorm forming. This type of thunderstorm, consist of a
group of thunderstorm cells moving as a single thunderstorm. The setup aloft,
is such that as the first thunderstorm matures, it is carried downstream by the
upper level winds, this allows a new thunderstorm cell to form upwind of the
previous cell. The process continues, numerous cells in various stages of
development, merging together forming a large cluster of thunderstorms that
moves along the path of previous cells. This is called training thunderstorms
and can lead to flash flooding. Multicell storms can produce severe weather, which
can consist of microburst, small to moderate size hail, straight-line wind damage,
and weak tornadoes.

Multicell
line storm, or more commonly called a Squall Line. Is when multi cell clusters
form into a line of thunderstorms with a continuous, well developed gust front on
the leading edge of the line.  Most of
the time, this gust front looks like a low hanging arc of clouds, called a
shelf cloud. Right behind the shelf cloud can be strong damaging winds. A
squall line chiefly causes straight-line wind damage. But it can also produce
small to moderate size hail, occasional flash floods and weak tornadoes. Long-lived
strong squall lines are called derechos (Spanish for ‘straight’). Derechos can
travel many hundreds of miles and can produce considerable widespread damage
from wind and hail. 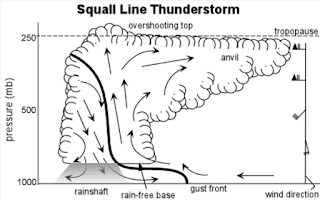 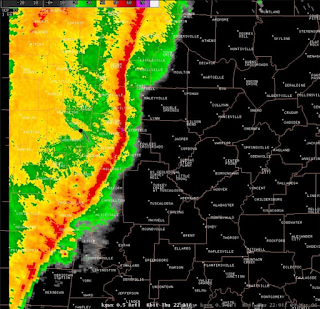 Many times, radar
will pick out areas along the squall line that bow out. These are known as bow echoes.
A strongly bowed section along the line is an indication of very high winds
behind the area of the bow echo. 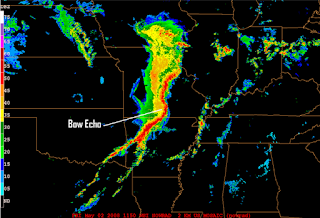 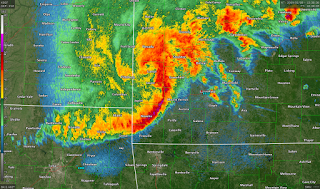 This type of
thunderstorms is called a mesocyclone because the storm is feeding off and rotating
around its tilted updraft. A supercell can last for several hours and produce very
strong downbursts large to giant hail, extremely heavy rain leading to flash
floods, and weak to violent tornadoes. 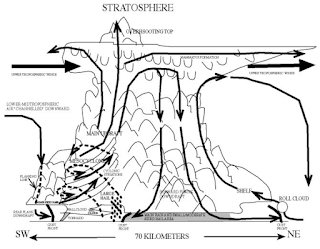 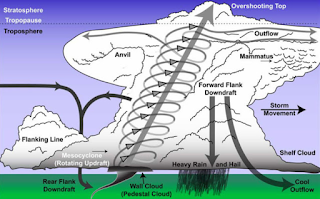 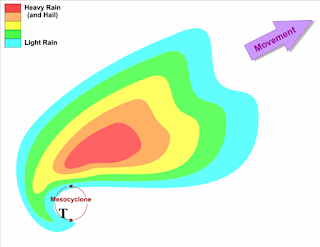 There are
three types of derechos. One type is called a serial” derecho and
is produced by multiple bow echoes embedded in an extensive squall line that
sweeps across a very large area, both wide and long. This type of derecho is
typically associated with a strong, migrating, low pressure system. An example
of serial derecho with a very extensive squall line and with embedded smaller
scale bow echoes like the derecho we saw on October 7th, 2020.  The second type of derecho is called a progressive
derecho and it is associated with a relatively short line of thunderstorms
which can look like a single large bow echo on radar. The damage path is chiefly
narrower than that of a serial type of derecho. The third type of derecho is called
a hybrid derecho, and may have mixed characteristics of both a progressive and
a serial derecho. 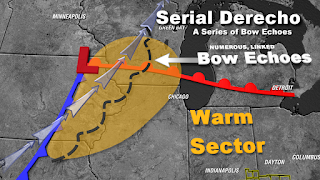 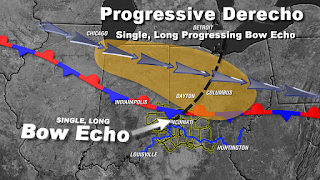 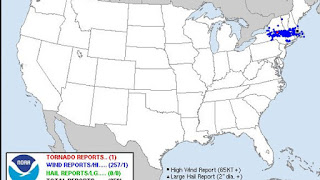 In order to
get a derecho in the Northeast, it takes a complex combination of factors that
have to come together at the exact right time in the exact quantity needed. If
any of these factors are off you will most likely just see scattered severe
thunderstorms.

Typically,
we need a hot and humid airmass to be in place. Also, we need a strong intensifying
upper level disturbance over Ontario, Canada, which is dragging a trough and
strong cold front (sometimes a stationary front will get the job done) into the
Northeast. As the trough becomes negatively tilted, we end up with a low to mid-level
jet overhead.  As conditions continue to
develop a cold pool of air will typically setup overhead.  With the westerly/northwesterly flow and the jet
streak overhead we see instability continue to grow along with a temperature
inversion (Cap) overhead. The Cap keeps the atmosphere from producing
thunderstorms. Think of the atmosphere as a well shaken can of soda, ready to
explode at the moment that cap is removed.
The conditions continue to build, until something like an outflow
boundary or lake breeze lights the spark and breaks the Cap. With the cap no longer
in place the hot, humid air at the ground with all that pent-up energy rushes
upwards as a result, thunderstorms quickly form and go severe.  The thunderstorms quickly become very organized
and become the monster thunderstorm complex squall line that becomes a derecho.
The thunderstorm updrafts tap into the strong winds from the jet streak aloft,
and mix down to the surface. Creating all the straight-line wind damage at the
surface. The complex feeds off of the environment ahead of it, which like  the case on October 7th, the derecho
can track hundreds of miles producing extreme damage along it’s track.