I want to
apologize; this 2nd installment is a couple of weeks late. I’ve been
much busier than I thought I would be. Who knew, running a horse ranch, running a private business, and raising a family, and posting weather for all y’all could be so busy?  🙂

I’ve been
getting a lot of questions from y’all asking what the winter will be like.
Winter lovers want to see a lot of cold and snow, while those who don’t
look forward to winter, want warm and less snowy weather.

Some of the
questions have asked for specifics on how the winter will fair for their
hometown.    I wish I could give you that kind of
exacting detail. But there is no way I can get that kind of detail over an
entire winter season.  A winter outlook
is basically just an overview of what I generally think the winter will turn
out for the Northeast and Northern Mid-Atlantic Region. The analysis I provide
is detailed, but I can’t tell when a storm is going to pop up or how much snow
will fall on a particular day.

The first installment for this winter’s outlook can be found here.

The ENSO is
all about the water temperatures in the equatorial Pacific.

La Nina Is
when we see colder than average (Blue) equatorial Pacific water in the Eastern
Pacific. To be declared a La Nina Pacific equatorial water temperature that is
cooler than average by at least 0.5, for at least three consecutive months

La Nina is
basically the cooling of the equatorial Pacific SST across the eastern into
central Pacific and warming SST in the western Pacific. We have to remember not
all La Nina’s are the same, so, there can be a lot of variations in the
atmospheric pattern that develops.

The much
colder than average waters in the equatorial Pacific are
pushed right up to the Coast of South America.  Right now, we’re seeing moderate La Nina
conditions. But the La Nina is getting stronger. So, this La Nina will likely
be moderate to strong. From what I’m seeing I believe the La Nina will end up
on the strong side. A strong La Nina is when SST are at least 1.5 colder than
average. The latest ocean temperature data, is showing we are at or could be
very soon at this temperature threshold.

We won’t
experience the full extent of this La Nina until January. So, a true La Nina
pattern would likely be sitting up after Mid to late December. During a strong
La Nina we often see warm air get drawn up the East Coast into the Mid-Atlantic
and Northeast. A strong La Nina also tends to cause the Polar Jet Stream to be
quite strong. This helps stop high latitude blocking from forming. This can
also lead to a warm winter and a general lack of wintertime precipitation. Now
if the La Nina becomes more central to west based; it would increase the odds
of a strong sustained ridge over the eastern CONUS. If this does occur, we
would see the AO and NAO stay mostly positive over winter 2020-2021.

The QBO shifted from an east
(negative) phase we saw over the Summer into early Fall, to a west (positive)
phase over the last 4- 6 weeks.  While a
positive QBO can help bring about a colder pattern; it also means we tend to
see more in the way of weak to moderate wintertime events.

The volume
of sea ice in the Arctic, is near a historic low value. This is especially true
in and around the Barents-Kara Seas and Alaska. Warm temperatures in the Arctic
are widespread. But as the SIE indicates the warmest temperatures are around
the Barents-Kara Seas.  When the amount
of Arctic sea ice is low, we lean in the direction for a greater likelihood for
a strong temperature gradient to set up between the Arctic Ocean and Canada and
the United States. This can have an influence on the pattern, to allow for a
greater chance for disruptions in the Polar Vortex to occur. If this occurs, we
would have a better chance of seeing at least some cold air in the Eastern U.S.
this winter season.  I would classify the
amount of sea ice as a wild card this winter. So, it could go either way. 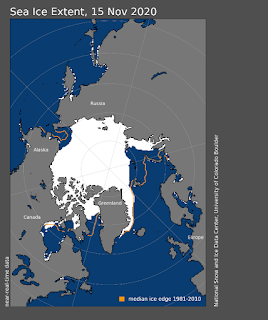 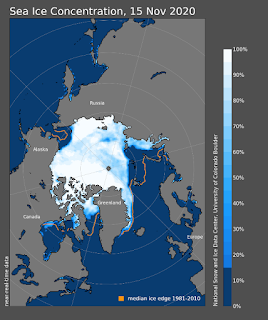 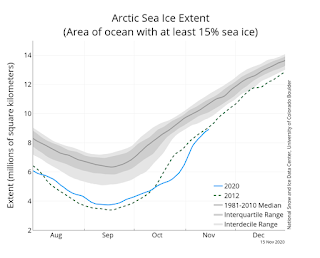 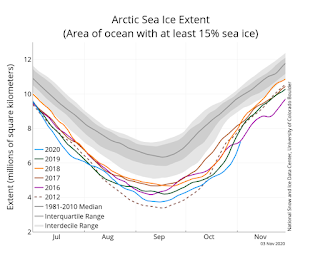 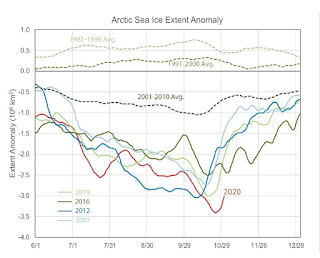 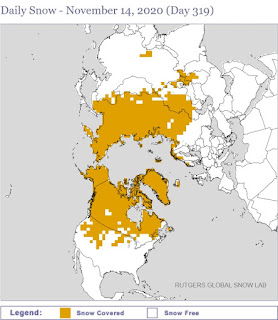 We look at
northwest Eurasia and Siberia for a clue has to how winter in North America
could unfold. The amount of snow growth in Siberia below 60° North, is a
very important indicator about the chances for high latitude blocking over
Greenland. The first half of October did see an expansion of snow across
northwest Eurasia into Siberia. But that has since faded a little. Right now,
Eurasia snow cover does look to be average to slightly below average.  Blocking over Eurasia has been lacking since
Mid-October. This isn’t a good sign if you’re a cold weather fan. But there is
still time for snow extent across Eurasia to improve.

We have had
decent snowfall in northwestern Canada and Alaska. A deep snowpack here, allows
for formation of polar and arctic airmasses, these cold air masses can drop
into the CONUS resulting is cold air bouts.

The Sun has been
relatively quiet for first few months of the new solar cycle. Whereas the previous
cycle had at least 6 months of no sunspot activity, now we’ve started to see
some smaller sunspot regions popping up here and there. I expect the Sun will
slowly become more active as we move through winter 2020-2021. 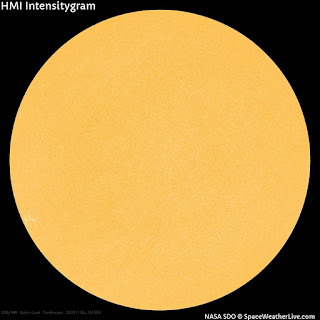 So far, November
has been warm here in the Northeast and Mid-Atlantic. Typically warm La Nina
Novembers tend to see mild warmer conditions during the winter. 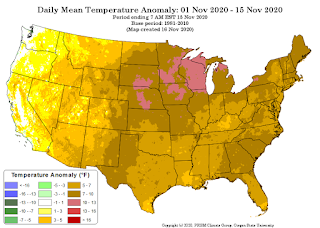 The combined
effect of the La Nina, the sea ice extent more extensive across Asia due favor overall
well above average temperatures all along the East Coast and across the southern
US, including Texas.

The setup, at least for now, looks to promote troughing across the western part
of North America, with ridging being more prominent across eastern North
America.

With what looks
to be pronounced negative height anomalies in the Arctic; my thinking is it
will encourage the AO and NAO to be more in the away of positive this winter.

Right now, given
everything, I think December is going start more on the cold side, it should end up overall with slightly above
average as far as temperatures go.  Once the La Nina really kicks in January and
February will see a volatile temperature pattern with overall well above
average temperatures for the Northern Mid Atlantic, Pennsylvania, a large part
of New York State and Southern New England.

A lot is
going to depend on how strong the La Nina becomes. Another thing that will
factor in, will be just how much high latitude blocking we end up with. A weak
La Nina increases the odds for more colder periods, along with a more favorable
storm track for more in the way of snow.
With the storm track bit more north, northern New York State and
northern New England will have a better chance of seeing closer to normal
snowfall, whereas the southern tier of New York State, Southern New England, as
well as Pennsylvania and the northern Mid Atlantic would have a better chance
of seeing well below average snowfall this winter.

Here is a
couple of maps that show how snowfall amounts can differ during a weak La Nina
and a strong La Nina. 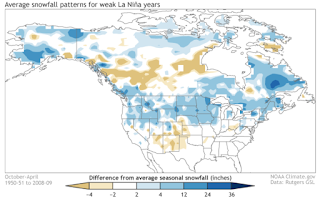 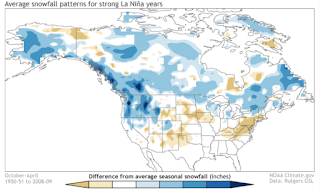 Because of
the northern primarily storm track, many of those areas in Pennsylvania, I-95 Corridor,
along the Coast, as well as Maryland and Delaware, will see well below average
snowfall. With a possibility of the same places that experienced the snow
drought last winter could see a repeat performance this winter.  But this area will be at a higher risk for
bigger rain events as well as an increased risk for ice events.

New York State
along and south of I-90, as well as southern/ into Central New England will see
average to below average snowfall. Northern New York State and northern New
England have a shot at overall average to above average snowfall; this will be especially
true for the Adirondack, Green, and White Mountains.  But with the temperature pattern looking to be
fickle, we could see a general lack of snowpack, which would be similar to past
winters.

There is
still time for things to change, so we will see.

I will try
to have my final part 3 installment posted
by the 2nd week of December.