I have a confession. I had started this series a long time ago, but
never finished it. A recent question on my Facebook Weather Page, led me to find
I needed to finish part 3. So here it is.

This is written  as simple and clear as I can make it. As always, I’m willing to answer questions to try and clear up any confusion. Here are links to the other parts.

The ENSO deals with the relative sea surface temperatures (SST) in
the equatorial Pacific Ocean. There are three phases… EL Nino, Neutral, and La
Nina.

El Nino (La Nina) is a phenomenon in the equatorial Pacific Ocean
characterized by a five consecutive 3-month running mean of sea surface
temperature (SST) anomalies in the Nino 3.4 region.

An El Nino is declared when the SST is equal to or above +0.5°C

An La Nina is declared when the SST is equal to or below -0.5°C.

SST are monitored in four regions along the equator:

These regions were created in the early 1980s. Since then,
continued research has led to modifications of these original regions. The
original Nino 1 and Nino 2 are now combined and is called Nino 1+2. A new
region, called Nino 3.4 (120Â°-150Â°W and 5Â°N-5Â°S) is now used as it correlates
better with the Southern Oscillation Index and is the preferred region to
monitor sea surface temperature.

The changes in sea surface temperatures during El Niño and La Niña
are caused and helped along by changes in the trade winds, which normally blow
from east to west across the tropical Pacific Ocean.

Both El Nino and La Nana can last more than a year, but it is rare
for El Nino events to last longer than a year or so, while it is common for La
Niña to last for two years or more. 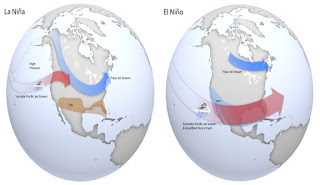 During an El Nino event, warmer than normal SSTs occur across the
central and eastern equatorial Pacific. During El Nino the trade winds weaken
or may even reverse. As a result, convection (thunderstorms) shifts east. This causes
weaker upwelling, which keeps the warmer water on the surface. 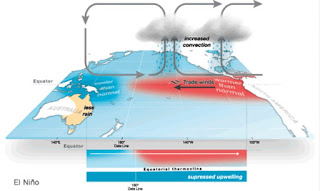 When temperatures are warmer-than-normal it is called an El Nino,
which is normally wetter and cooler across the Northeast. Outbreaks of very
cold Arctic air are much less common during an El Nino winter.

During El Nino, the jet stream along with vertical windshear and
other factors become more hostile during the Atlantic hurricane season which runs
from June to the end of November. This helps lessen the number and strength of
Tropical Cyclones.

In the neutral state (neither El Nino nor La Nina) tropical Pacific SSTs are generally close to average.  The trade winds blow
east to west across the surface of the tropical Pacific Ocean, bringing warm
moist air and warmer surface waters towards the western Pacific and keeping the
central Pacific Ocean relatively cool. The thermocline is deeper in the west
than the east. 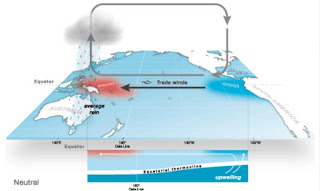 During the neutral phase, the jet still can bring colder air
into the Northeast. However, storms don’t get as much help from the southern
subtropical jet. One thing I’ve noticed is there is a lot of Greenland blocking
during an ENSO neutral winter. Moisture out of the Gulf tends to move to the SE
coast where it can move up the coast.  In
a neutral ENSO the southern jet stream plays a huge rule in ice/snow events in
the Northeast, timing of cold air outbreaks and storms is critical.

During an La Nina event, warmer than normal SSTs occur across the
central and eastern equatorial Pacific.  This
leads to stronger trade winds that shift the convection farther west.  The conditions allow for stronger upwelling, which
brings colder deep ocean water to the surface. 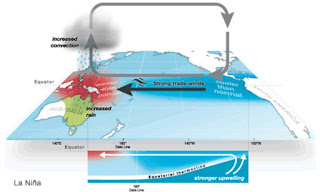 During hurricane season (June to November), upper-level winds are
much lighter, and therefore more favorable for tropical cyclone development in
the Caribbean and Atlantic.

These ENSO phases peak during the winter and early spring, but weaken
as summer approaches. So even if an El Nino developed in January or February it
wouldn’t make a difference for snow in the Northeast.

These ENSO phases peak
during the winter and early spring, but weaken as summer approaches. So even if
an El Nino developed in January or February it wouldn’t make a difference for
snow in the Northeast.

The SOI is a measure of the atmospheric pressure difference between
sea level pressures at Darwin, Australia, and Tahiti. Large negative values of
the SOI are associated with El Nino and large positive values associated with
La Nina. The SOI index, being a simple measure of pressure differences, is
highly variable, much more so than other indices such as ocean temperatures.
So, the SOI will at times be positive during El Nino events and negative during
La Nina events. As such, a multi-week running average of the SOI can provide a
better indicator of overall ENSO conditions.

The EPO pattern opens the door to very cold Arctic and Siberian air
into the US. Here’s an image that depicts the negative phase of the EPO. 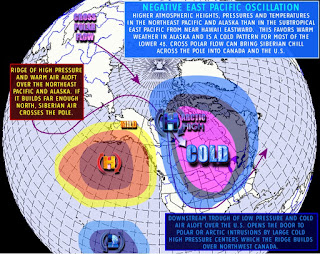 The weather pattern in the positive phase is just the opposite of
the negative, and so you have low pressure over high pressure which gives the
central and eastern US a different outcome. 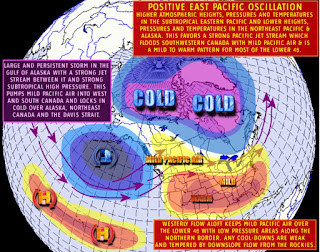 The AMO is a series of quasi-periodic (not completely regular)
variations, The AMO signal is based on spatial patterns in SST variability
after removing the effects of anthropogenic forcing on temperature, revealing
natural long-term patterns in SST. The AMO is characterized by warm and cool
phases with periods of approximately 20-40 years. The AMO index is related to
air temperatures and rainfall over North America and Europe and is associated
with changes in the frequency of droughts in North America and the frequency of
severe hurricane events. A positive phase of the AMO is associated with above
average water temperatures across the northern half of the Atlantic basin and
increased tropical activity, while a negative phase of the AMO is associated
with cooler water temperatures and decreased tropical activity. 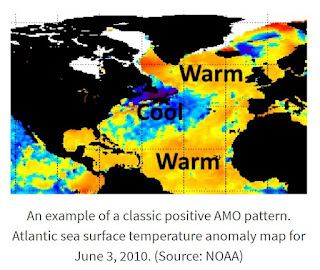 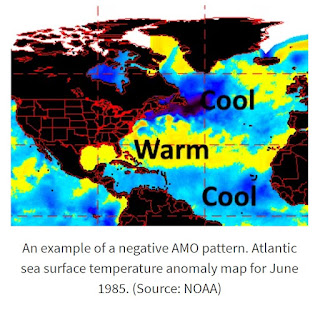 The PDO is often described as a long-lived El Nino-like pattern of
Pacific climate variability. As seen with the better-known ENSO, extremes in
the PDO pattern are marked by widespread variations in the Pacific Basin and
the North American climate. 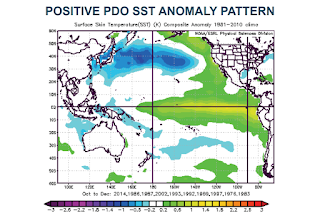 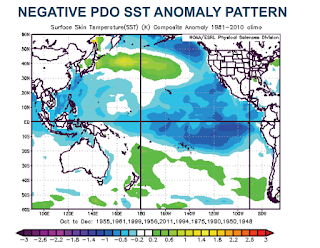 The PDO is detected as warm or cool surface waters in the Pacific
Ocean, north of 20° N. During the positive phase, the west Pacific becomes cool
and part of the eastern ocean warms. During the negative phase, the opposite
pattern occurs. It shifts phases on at least inter-decadal time scale, usually
about 20 to 30 years. 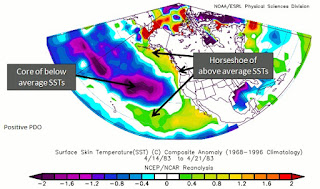 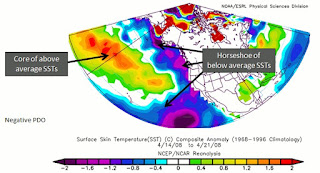 The impacts of the PDO are similar to those associated with ENSO
events. When in the positive phase during the winter, the Aleutian low is
deepened and shifted southward, warm/humid air is advected along the North
American west coast and temperatures are higher than usual from the Pacific
Northwest to Alaska but below normal in Mexico and the Southeastern United
States. Winter precipitations are higher than usual in the Alaska Coast Range,
Mexico and the Southwestern United States but reduced over Canada, Eastern
Siberia and Australia. McCabe showed that the PDO along with the AMO strongly
influence multi-decadal droughts pattern in the United States, drought
frequency is enhanced over much of the Northern United States during the
positive PDO phase and over the Southwest United States during the negative PDO
phase in both cases if the PDO is associated with a positive AMO.

The QBO is a measure of the oscillation in wind direction about 15
miles up (generally where atmospheric pressure is between 10 and 100 mb) around
the equator. These winds reverse direction (oscillate) roughly every other year
(quasi-biennially) between easterly (negative-phase QBO) and westerly (positive-phase
QBO).

Effects of the QBO include mixing of stratospheric ozone by the
secondary circulation caused by the QBO, modification of monsoon precipitation,
and an influence on stratospheric circulation in northern hemisphere winter
(mediated partly by a change in the frequency of sudden stratospheric
warmings). Eastward phases of the QBO often coincide with more sudden
stratospheric warmings, a weaker Atlantic jet stream and cold winters in
Northern Europe and eastern USA whereas westward phases of the QBO often coincide
with mild winters in eastern USA and a strong Atlantic jet stream with mild,
wet stormy winters in northern Europe. In addition, the QBO has been shown to
affect hurricane frequency during hurricane seasons in the Atlantic and
research has also been conducted investigating a possible relationship between
ENSO and the QBO. 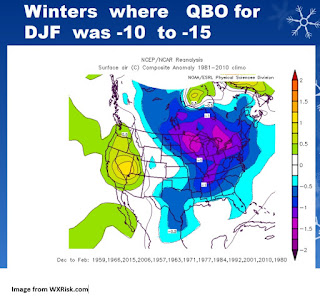 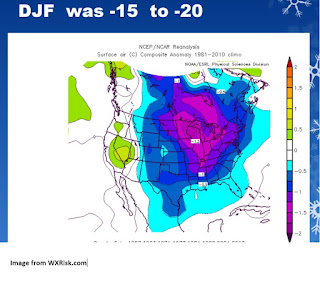 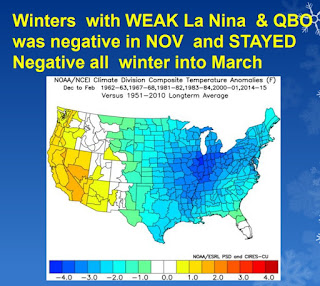 During winter and spring, the pattern consists of a north-south
dipole of anomalies, with one center located over the Kamchatka Peninsula and
another broad center of opposite sign covering portions of southeastern Asia
and the western subtropical North Pacific. Like the EPO, the negative phase
favors colder weather across the eastern portions of North America. However, on
average, the westward extent of cold is greater during a negative WPO compared
to a negative EPO. At times, the WPO and EPO will be in phase, both being
negative or positive at the same time.