Here is a
update to my earlier Spring Outlook for 2021

The Spring Outlook can be found here. 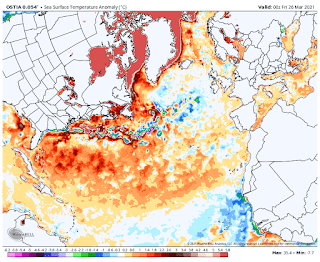 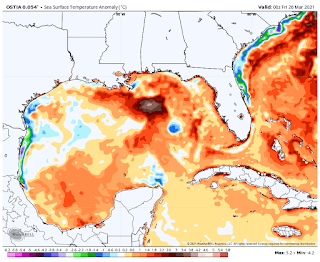 Looking at
Sea Surface Temperatures (SST) in the Pacific, it’s clear we’re still in a weak La Nina. But as I’ve been
saying, we should see the La Nina conditions strengthen again as we head toward
Summer. We also have those cool SSTs off the Southwest Coast. These extend
north along the West Coast into the Gulf of Alaska.  These two teleconnections will play a big
role in the trough and ridge pattern across North America this Spring. Add to
that the severe drought conditions across the Southwest CONUS, means we have an
interesting and possibly quite dangerous Spring ahead of us.

The North
Atlantic Oscillation (NAO) has been strongly positive, but now it looks to go
negative.

Currently
the Madden Julian Oscillation (MJO) is currently
active over the western Indian Ocean. The MJO will continue to move across the
Indian Ocean, currently Phases 2 and 3 (cold phases for this time of year),
then Into Phases 3 and 4 where it intensifies.
This means that our warm weather of late, is coming to an end.  MJO phase 2 and 3 are showery and cold here in
The Northeast.   As we move toward April
the MJO is in phase 4 and 5, which are still cold phases but they are also
dryer here in the Northeast and Middle Atlantic Region. As we get into April
the MJO looks to move into Phase 6 and then Phase 7.  Phase 6 is Warm and Dry in April, but phase 7
is a cool and wet phase. If it gets into Phase 8 that is slightly a warmer
phase but it does tend to be a little dry. 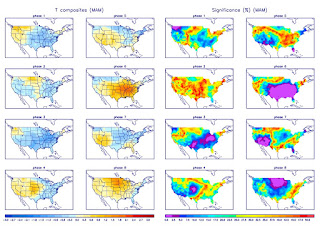 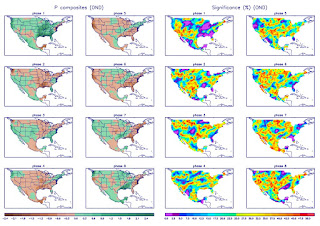 The MJO is
indicating that the warmth of the last couple of weeks could be a false spring.
Meaning that we’re still not out of the woods as far as cold intrusions and
possible snow events.  I do think the
Pacific will tend to stay in the driver’s seat. So, as we get closer to late-April,
the threat of real cold and snow should be over. The setup in the Pacific is a
strong indicator that the predominate pattern during the second half of Spring heading into Summer,
will feature a lot of ridging over the East. So, my earlier thoughts for overall
temperatures to be above average for the Northeast into Middle Atlantic Region is
spring are still looking right. But April could see real cold invade around mid month.

Generally,
the March, April, and May time period look to see overall temperature anomalies
to be +1.0°F to +3.0°F above average. 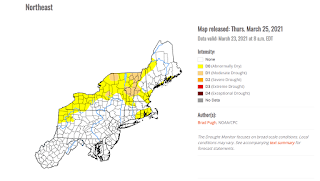 Here is a
look at the current drought conditions from the Climate Prediction Center. The
Map shows, some areas in across the Northeast into the Middle Atlantic are
currently experiencing dry conditions and, in some cases, a moderate drought.

Below is a
look at the latest Soil Moisture Anomaly for the CONUS. 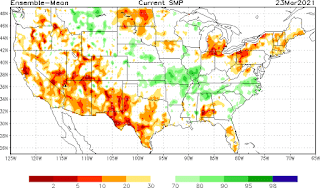 We’ve had
yet another week of below-normal precipitation across our region. As a result,
Moderate drought has expanded in western Vermont and northern New York, while
abnormal dryness expanded in western Maine, northeastern Massachusetts, and
western and northern New York. Conditions remained unchanged elsewhere in the
region. The U.S. Drought Monitor released on March 25 showed 8% of the
Northeast DEWS region in a moderate drought and 39% as abnormally dry compared
to 7% and 33%, respectively, last week.

The
Standardized Precipitation Index (SPI) is a simple measure of drought
(absolute, departure from normal, maximum, and minimum) and is based solely on
the accumulated precipitation for a given time period. For this map is show
precipitation departure over the last 60 days, compared with the long-term
average.

Snowfall: For
the Middle Atlantic into Pennsylvania your chances for accumulating snow is
very low, so you’ve most likely seen the last of the white stuff. But some accumulating
snow is still a real possibility across the northern tier of Pennsylvania, New
York State, and New England.  The odds of
significant snowstorms are over in my opinion.

In the 2021
Spring Outlook part 2, I talked about how the widespread severe to exceptional
drought across the Southwest CONUS into the Central Rockies, and how it would
play a big role in the Spring severe pattern.
Between that and the cooler than normal Pacific explains why the severe
season is starting out a little earlier than average.   Typically, during years like this the
tornado season starts around 4 weeks earlier and tends to be more active than average.

In the first
part of the Spring Outlook; I also talked about how the tropical Pacific are
similar to the infamous year 2011. Remember, back in April 2011 there was a very
extreme with deadly historic tornado outbreak. 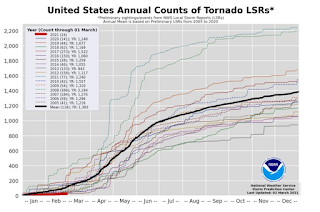 From January
into March, we saw a slow start of the storm season. By March 1st
there were only 24 reported tornadoes across CONUS.  But the severe weather activity has started to
trend upward.  La Nina years do see to
start earlier than usual. Also, when the Pacific is cool Dixie Alley, often
experiences significant tornado outbreaks.  And with pattern the weather models seem to be
indicating, this year’s tornado season could again be an above-average this
spring. 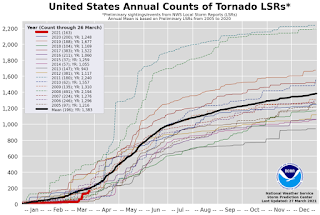 2011, also
had a slow start, that too was due to the cooler Pacific waters. But those cool
Pacific SST led to a vigorous and stronger Jet Stream.  So, with a similar SST and atmospheric pattern
this year could also be very active. In last than a week, the month of March
has seen to severe tornado outbreaks, both of which had the Storm Prediction
Center raised rare High Risk severe chances. Currently the tornado count stands
a 163, which means we’re almost to the yearly mean for this time of year.

The same
setup that looks to bring the Northeast into Midwest seeing maybe a soggy
spring. The Ohio Valley, Maryland, Delaware, Much of Pennsylvania, and Western
New York State will most likely experience enhanced severe activity this
Spring. For the rest of New York State, far eastern Pennsylvania, New Jersey
and New England, severe chances look to be around average for spring 2021.

Well that is it, Just a reminder, my 2nd part of the Atlantic Hurricane Outlook, will be released in a couple of weeks.