Well Spring is here and we’re quickly
moving toward the Official Start of the 2021 Atlantic Hurricane Season, which
starts June 1st and runs to November 30th.

Part 2 assumes that you’ve read part 1.
Part one covered definitions and other things, that is assumed you’ve read. I
will not recover all that ground. So, if you haven’t read the first part take
the time to do so now.

Part one of this outlook can be found here.

In the past an average Atlantic
Hurricane Season was considered 12 named storms, 6
becoming hurricanes and 3 becoming major hurricanes (based on 1981 to 2010
average), Brian McNoldy, of the University of Miami, has reassessed that
average based on the increased activity the past three decades. Using that, he
suggests that the new normal is closer to 14 named storms, 7 becoming
hurricanes, and 3 becoming hurricanes (based on the 1990-2020 average).

Most of us know the 2020 hurricane
season was undeniably crazy in the Atlantic, with a total of 30 named
storms.  Last season had 13 hurricanes, 6
major hurricanes, and a whopping 12 tropical cyclones made landfall in the
U.S., 6 of which were hurricanes.  Of
those 12 storms five of them ended up striking Louisiana. So, the question of
the hour is what about 2021?

Last year we had a La Nina, very warm
Atlantic Ocean SST, low vertical wind shear, and strong Atlantic trade winds
that were able to push the tropical waves farther west.  As a result, storms formed farther west closer
to the US, Caribbean, and Gulf of Mexico (GOM), which led to all the landfalls.
Last year was a record-breaking season. Looking at past seasons there have been
back-to-back active seasons for two seasons in a row. So, while 30 named storms
this season are unlikely, a very active season is possible. 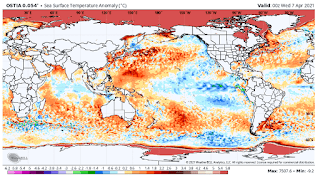 When it comes to tropical activity,
water temperatures in the Atlantic and even the Pacific are key. 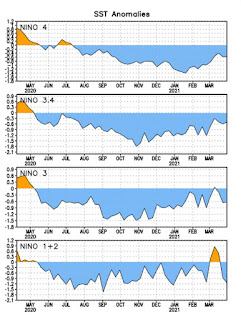 The tropical Pacific is currently
characterized by La Nina conditions. 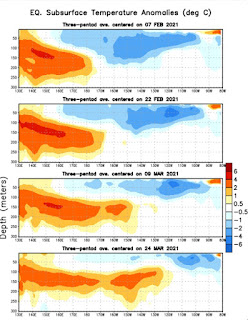 SST anomalies are generally between -0.5
and -1.1°C below average for most of the eastern and 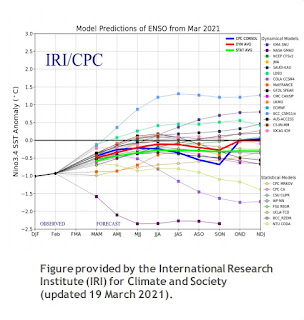 La Nina also plays an important role,
as the cooler water in the Pacific does not create as much wind shear as El Nino
(warmer water = rising air = more wind). Those El Nino winds can tear apart
forming storms in the Caribbean and Gulf, but with a La Nina in place, that
won’t happen. The most recent models predict that La Nina may last all year.
Notice that red line is below the 0.0 black line, which is neutral:

We’re still in a weak La Nina.  It looks like we will still see the La Nina
try to get to ENSO neutral conditions later this Spring or early Summer. As I
outlined in Part 1, Moving to an El Nino is very unlikely; instead, I still
think we will end up reversing back to La Nina.

While we are running above normal for
water temps right now in the Atlantic, we are NOT running as warm as this time
a year ago, likely due to the huge polar outbreak in February: 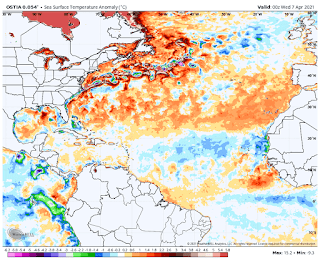 The western Atlantic, northern, and
western Gulf of Mexico (GOM), and much of the Caribbean are above average.
Water temperatures across much of the Atlantic basin are above normal for late
March, particularly in the Gulf of Mexico where temperatures ranged from the
mid-70s F to low-80s F.  The western GOM
is currently running cooler than average, but that should change as we approach
the 1st of June.

In part one of this outlook, I talked
about the West African Monsoon. Because of all that moisture we will see an
above average number of tropical waves develop off the African Coast, a result
of the African Easterly Jet. Last year we saw a lot of Saharan Dust out over
the Atlantic, at times it drifted into the CONUS. This year could be similar,
but I don’t think the dry air and dust will be quite as prevalent. But by the
time we get closer to the season peek, much of the dust should clear out, leading
to more tropical development.

But, overall the current SST pattern
does support the idea of an above active hurricane season in the Atlantic
Basin.

The 2020 Atlantic hurricane season
featured a robust Bermuda high that extended far south. This was the reason for
all the tropical activity in the Caribbean and GOM. The 2021 season should end
up a Bermuda High that isn’t quite as strong nor extend into the Caribbean, so
tropical cyclones will have a better chance to recurve into the western
Atlantic. But the result of this would mean the Eastern Seaboard of the US and
Atlantic Canada would be at increased risk of landfalling systems. Another
result will be less storms forming in the Main Development Region. So, storms
would strengthen outside the MDR leading to stronger storms possibly impacting
the East Coast.

Everything I’m looking at, is telling
me the 2021 Atlantic Hurricane Season is going to be another dangerous and
devastating season, while it might not be quite as impactful as 2020. I do
think the East Coast and particularly the Middle Atlantic Region and Northeast,
are at a heightened risk even compared to 2020.

Other outlets are starting to release
their early thoughts on this year’s Atlantic hurricane season. All these
outlets will release updated outlook as we get closer to the 1st of
June.

Have a safety
plan:

We’re in April, so the time to formulate
a hurricane safety plan and know your evacuation routes and where the nearby
shelters is here. Remember it only takes on hurricane (it doesn’t even have to
be a major hurricane) to bring life altering devastation to your life. Even
tropical storms have to potential to cause life-threatening flooding.

Here are some items to have on hand
and to think about as you set a plan in place for dangerous weather.

Drinking water — at least 1 gallon
per person, for 3 to 7 days

Have a stock of items on hand to care
for any small children and the elderly.

Medications and oxygen if needed.

Important documents (in a waterproof
bag)

Top off fuel tanks on vehicles

Well, that’s it. I will release part 3 of my hurricane outlook toward the end
of May.

Part 3 can be found here.
Any questions can be left here, or on my Facebook weather page, found here.