Will the
2021 Atlantic Basin hurricane season be as bad as 2020’s record breaking
season?

This is the
final installment of my 2021 hurricane outlook for the Atlantic Basin. If you’re
reading this, it’s assumed you have read parts 1 and 2. Part 1 can be found
here, and part 2 can be found here.  May 9th
– 15th is National Hurricane Preparedness Week; so, posted the 3rd
part seems appropriate. You can find preparedness information at the end of
part 2.

For this
outlook, I run down through many of the particulars, updating on La Nina, how
many tropical storms and hurricanes I am expecting, along with the probability
of path of many tropical systems this season, Please Like and Share!

The Atlantic
hurricane season runs from June 1 to November 30; the season peaks during
August through the first half of October. This is when the ocean waters are
typically at their warmest.

This outlook
is based on many factors, including: La Nina and other teleconnections,
Atlantic Basin Sea Surface Temperatures (SSTs), computer model guidance,
atmospheric conditions in the North Atlantic, and past analogs years that
exhibited a similar overall pattern.

La Nina,
we’re still in a moderate La Nina, the models do take it back toward neutral.  Meteorologist are split on whether the ENSO
stays neutral or reverts back to La Nina conditions.  I still think we’re going to see the La Nina
conditions reenergize later this year into the winter. But before that, the
atmosphere isn’t going to respond to the neutral trend right away. Typically,
the atmosphere response lags a few months, so we most likely won’t see a real
drop off in tropical activity until late October or November.  La Nina, will result in much below average
wind shear over the tropical Atlantic, Caribbean into the Gulf of Mexico (GOM).
Last seasons La Nina became one of the
strongest in at least 10 years.

Here is a
look at the latest IRI forecast chart of the ENSO for 2021.

As I said in
part 2, the AMO is generally positive. During the positive warm phase the
conditions in the Atlantic Basin are much more favorable for tropical cyclone
formation.

During a
negative NAO tropical cyclone are more likely to make landfall in the GOM; we
had a generally negative NAO during the 2020 season.

Conditions
are going to be more favorable for tropical cyclone development over the
eastern Atlantic and west Africa.  Due to
a strong West African Monsoon.

I don’t
think we will see as much Saharan Air Layer (SAL) …Saharan dust… this season as
we saw last season. African dust over the Atlantic tends to make conditions
over the Atlantic more hostile for tropical cyclone development. But even with
2020’s large and imposing dust layer, 2020 went on to be a hyperactive
hurricane season.  A big reason for that
was the strong La Nina in the Pacific.

The Bermuda
High was very strong last season; this season it won’t be as strong, also it
looks to be displaced a little more north and east. As a result, the East Coast
is going to be at higher risk this season, due to the greater likelihood of
tropical cyclones recurving out of the MDR into the western Atlantic off the
Eastern Seaboard.

While the
East Coast is going to be at a heightened risk, especially during the 2nd half
of the hurricane season, that doesn’t mean the GOM won’t also be a risk.

There is
going to be an enhanced risk for the Bahamas, Florida and the eastern GOM,
unfortunately that might include Louisiana as well; who was hit very hard last
season.

Last season
the Southern and especially the southwest Caribbean was very active. This
season is going to see a lot of that activity shift north into the northern
Caribbean

Here is a
look at the current Sea Surface Temperatures (SSTs) in the Atlantic Basin. in
the Main Development Region (MDR), northern Caribbean, GOM, and along the East
Coast and Atlantic Canada SSTs are well above average for this time of year;
these temperatures are only going to get warmer as we move through the
hurricane season.  Now the inter tropical
convergence zone (TCZ) is slightly below average, but that too is going to warm
up.

SSTs like
these are typically seen prior to an active Atlantic hurricane season, and correlate
very well with most of the analogs.

With the
warm SST in the Northern Caribbean, eastern GOM, and along the East Coast, we
will have to be mindful of the possibility for rapid intensification as
tropical cyclones move over that warm water. 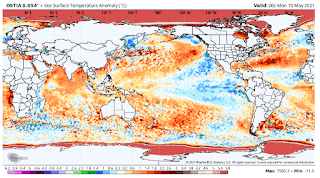 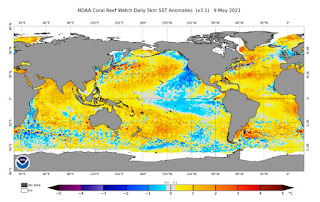 Last year,
saw the most active Atlantic hurricane season in recorded history, with a total
of 31 tropical cyclones, 30 named storms, 13 hurricanes, and 6 major hurricanes.
When we look back at April and May of
last year and compare that to this year, we can see they’re remarkably similar
to each other.

500mb images
are courtesy of the University of Wyoming 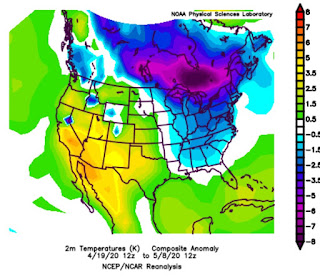 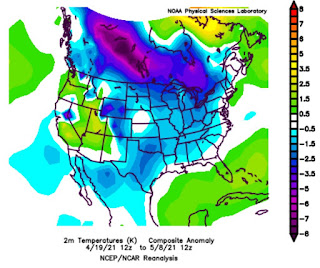 This Spring
has seen a lot of persistent high latitude blocking near Greenland. This likely
to continue. This is going to help allow for warmer water in the tropical
Atlantic this season.

This season will most likely see quite a bit of upper level ridging in the Northern Pacific and in the Northwest Atlantic. If this does happen, the setup would help funnel tropical cyclones closer and into the East Coast.

Remember,
even during an active year, there is no guarantee there will be a landfall. But
with the pattern supporting the idea of recurving TC’s off the East Coast, the
odds certainly support the idea of heightened landfall risk along the East
Coast.  It’s been quite a while since the
Northeast had to deal with a major hurricane. While there is no certainly; I
think the Northeast is at a heightened risk for a major impact this
season.

Like last
year, I think we have a good chance to get through the entire naming list in
the Atlantic Basin.

ACE sums up
the intensity and duration of storms. So, a weak, short-lived tropical storm
counts for almost nothing, whereas a major, long-lived hurricane will quickly
rack up dozens of points. The higher the ACE number the more powerful and
destructive the storm or season:

Well, that’s
it, this is the last preseason outlook update. I could release some revisions
to this during the season. Questions are always, welcome, either on here or on
my Facebook weather page. The link to that page is here.