I’ve been
asked by many followers to provide a summer outlook. So, your wish is my command
😊

This outlook
is based on the current weather pattern, teleconnections, historical weather
data and weather patterns from this spring. Remember a seasonal outlook uses a
broad brush; So, it’s not about the day to day or even week to week weather
pattern; rather it’s about the general trend and pattern for the entire summer.

The start of
summer is about two and a half weeks away. The meteorological summer runs June
through August. But The summer will officially begin at 11:32 P.M. on June 21,
2021.

You can find
my 2021 spring outlook here.

I want to
point out that any one factor doesn’t necessarily correlate with a particular
kind of summer. Instead, it’s a combination of many things.

El Nino:
characterized by a positive ONI greater than or equal to +0.5ºC.

La Nina:
characterized by a negative ONI less than or equal to -0.5ºC.

By
historical standards, to be classified as a full-fledged El Nino or La Nina
episode, these thresholds must be exceeded for a period of at least 5
consecutive overlapping 3-month seasons. 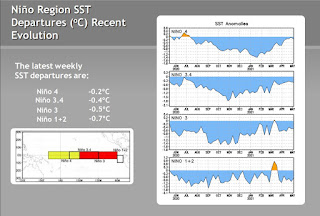 The ENSO is
currently in La Nina (cool phase), with cooler waters persisting across the
eastern Pacific equatorial region. On average the Northeast and Mid-Atlantic
see warmer summers during la Nina years. The current La Nina is fading, and
looks to become neutral heading into the first half of summer 2021.  On my Facebook Weather Page, and in my 2021
Atlantic Hurricane Outlook, I touched on how I think the La Nina is going to
redevelop.  If it returns, it should end
up being a central based (Modoki) La Nina. 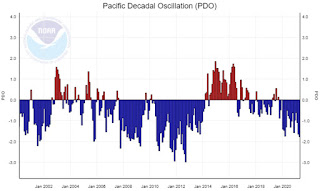 The PDO has
been negative. Since March the negative PDO has trended generally stronger.  Typically, negative PDOs run parallel with La
Nina. The idea of a moderate to strong PDO lasting through the Summer and Fall,
is one of the major factors I see hinting at the possibility for a return to La
Nina later this year.

Most of the
climate models are also suggesting the idea of a warm summer, especially across
Northeast into the Middle Atlantic Region.

So based on
that idea, By June it should feel more summerlike. But, we should only see spurts of hot temperatures for the first month or
so of Summer.  But as we get farther into
Summer we’ll start to see more in the way of heat and humidity, with temperatures climbing well into the 90s.

Last Summer
was one of the hottest summers on record in the Northeast and Middle Atlantic. It
was also fairly dry. This Summer could end up much different.

In the
spring outlook I talked about the severe weather prospects. The Northeast looks
to see above average severe weather chances this summer, especially for June
and July.  The pattern is similar to last
year, so there is going to be an enhanced risk for derechos this summer.

With June
and Much of July looking to b somewhat stormy, it will keep the lid on for much in the
way of long duration heat for the first half of summer 2021. The first part of June could become hot, but then a cool down is likely mid to late June. Right now, the
Northeast looks to see the real summer heat take hold mid to late July and August.

90-degree
days are one of the metrics used to determine just how much heat we see during
a summer season. During the summer of 2020 even far northern areas of the
Northeast, like Watertown, NY, Burlington, VT, and Caribou, ME saw an above
average number of 90-degree days.

The entire Northeast
and northern Mid Atlantic should see a similar number of 90-degree days as we
saw in summer 2020. Here is a list of cities along the eastern seaboard showing
my general idea for the number of 90-degree heat days for this summer.

Here is a
chart showing a blend of my analog years, with 2011 being double weighted. 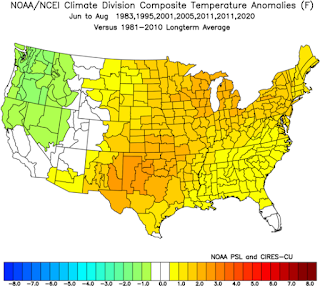 This outlook
for a hotter than average summer is consistent with the National Oceanic and
Atmospheric Administration’s outlook.

As far as
overall temperature ideas Temperatures are expected to average 1-3 degrees
higher across the Northeast compared to 2019 and closer to 1-2 degrees higher
along the I-95 corridor.

The wet
first half of Summer 2021 should help keep the current Abnormally Dry and
Moderate Drought conditions under control, July into the first week of August could end up being fairly wet. We could see a return to near average ground moisture levels by the end of July.

Then as the
La Nina returns, we could end up with a lack of precipitation for the end of summer
into the fall.

You can find
my 2021 Atlantic Hurricane outlook here.

Well, that’s
it. As always questions are welcomed.
You can leave them here or leave them on my Facebook weather page, that
can be found here.