La Nina faded and ended this
past spring. Well, quite a few months ago, I talked about the idea of a
resurgence of La Nina in the eastern and central equatorial Pacific. As time
goes on, that idea is becoming more and more likely. The Climate Prediction
Center, which is part of the National Oceanic and Atmospheric Administration
has issued a La Nina Watch for late autumn and this coming winter. 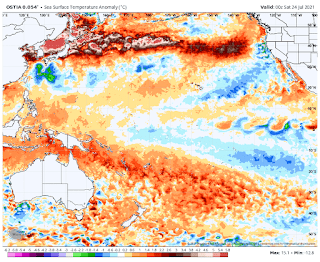 When we look at the Sea
Surface Temperature (SST) anomalies in the equatorial Pacific; there is no doubt that
the water conditions are getting cooler once again. Right now, the SSTs east of
the Dateline are on the neutral cooler side. But as we approach winter
2021-2022, the SST should become cooler. This will be especially true in the
Central tropical Pacific. There are two types of El Nino: The most common is
the classic east based La Nina. Less common is the central based Modoki La Nina.
Both of these have an impact on our weather here in the Northeast.  The idea of La Nina returning is going to have
implications on not only the 2nd half of the Atlantic hurricane season; but
also, on autumn 2021 and winter 2021-2022.

So, what exactly is La
Nina?

The El Nino-Southern
Oscillation (ENSO) is a cyclical climate pattern involving changes in the
temperature of waters in the central and eastern tropical Pacific Ocean. As
with all teleconnections the ENSO has three phases. El Nino involves
warmer-than-average SST. La Nina is when SST are colder-than-average. The third
phase called ENSO-neutral (sometimes referred to as La Nada), this is when SST
in the central and eastern Pacific are considered average.

El Nino: characterized by a
positive ONI greater than or equal to +0.5ºC.

La Nina: characterized by a
negative ONI less than or equal to -0.5ºC.

By historical standards, to
be classified as a full-fledged El Nino or La Nina episode, these thresholds
must be exceeded for a period of at least 5 consecutive overlapping 3-month seasons.

The equatorial Pacific is divided into 4 regions: Nino 1+2. Nino 3, Nino 3.4, and Nino 4. The CPC considers El Nino or La Nina conditions to be present when the
monthly Nino3.4 OISST departures meet or exceed +/- 0.5ºC along with consistent
atmospheric features. These anomalies must also be forecasted to persist for 3
consecutive months.

Here is a look at the current Nino region and subsurface values. 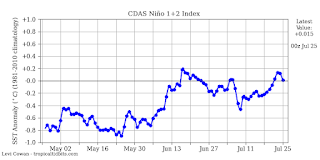 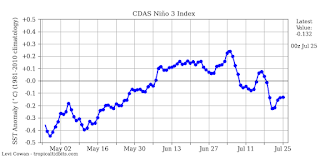 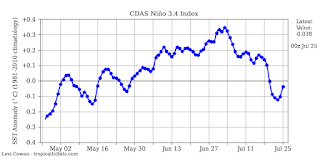 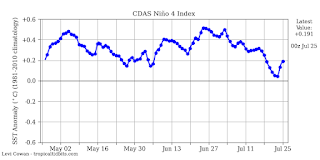 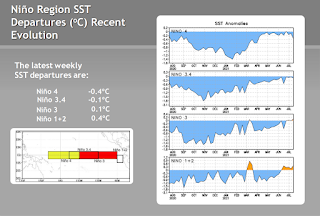 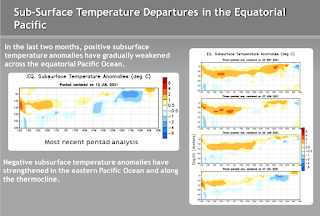 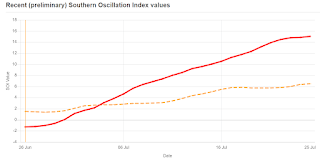 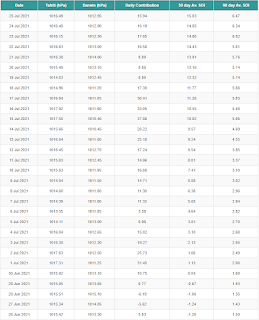 The SOI Turned Positive on
June 29 with a daily value of positive 0.77. One day later on June 30 it had
surged to 10.75. However, that value quickly was eclipsed. Other than July 5
and 6, the entire month of May so far has been very strongly positive. In a
similar trend, the 30-day SOI value pasted into La Nina territory (plus 7.0 or
higher) on July 10 at positive 7.41. Since then, the 30-day SOI was at positive
15.03. The SOI jump during July is occurring at almost the same point it
happened a year ago, in July 2020.

So, there is little doubt, that
we’re quickly moving into a La Nina.

The Oceans and Seas cover
around 71% of the Earth’s surface. The Pacific Ocean makes up around 30% of
that. Since the Oceans absorb hold most of the energy available to the global
climate system; it should be no surprise that the ENSO has such a huge impact
on global temperatures and precipitation patterns.

As I said above, La Nina is a
natural climate pattern that is marked by cooler-than-average ocean water in
the central Pacific Ocean. It is one of the main drivers of weather in the
United States and around the world, especially during the late fall, winter and
early spring. 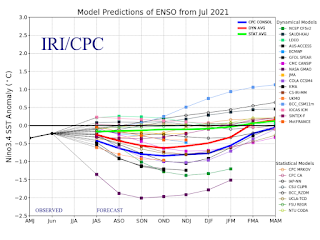 The strength, longevity, and
placement of La Nina plays a role in how it will influence winter weather
patterns.

The idea of a returning La Nina
for the 2nd half of the hurricane season. Indicates the likelihood
of an increase in Atlantic hurricane activity. This ties into the hurricane
outlook I released a couple of months ago.
La Nina weakens the wind shear over the Gulf of Mexico, Caribbean and
tropical Atlantic, which enables aids in the ability for tropical cyclones to
develop and intensify. There is no change in my thoughts I released with my Atlantic hurricane outlook.

Temperatures have been
generally above average for much of the Northeast and Middle Atlantic for the
first half of summer. The pattern that has been driving this warmth looks to
persist into the fall, which will generally lead to above-average temperatures
for much of the region.

Historically La Nina falls,
tend to be warmer and drier than normal while winters tend to be wetter than
normal. However, there are also many other complicated factors in the
atmosphere and oceans that can also impact our weather patterns.

Temperatures will be the
farthest above average from the Southern and Central Plains into the Great
Lakes and much of the Northeast.

When I consider the pattern that is in place and how it looks to evolve. I come to the following conclusions.

Looking at the month of
August as a whole suggests a slightly above average month (+1.0°F to +3.0°F)
using long term climate models and seasonal/global observation trends.

Widespread overall
above-average temperatures are anticipated as meteorological fall starts in
September. These above-average conditions are likely it stick around for the
entire month across the Northeast and northern Mid Atlantic.

During November most of the
region should see temperatures close to seasonal. But for Southeast
Pennsylvania, New Jersey, Maryland, Delaware looks for overall temperatures to
be above average.

As far as precipitation
September and October should see the pattern return to seasonal average across
the Northeast and Mid-Atlantic. Right now, November looks to see regional
precipitation amounts fall to below average levels.

Before July, we were very dry
here in the Northeast and Mid-Atlantic. But with the well above monthly average
rainfall for July drought conditions have greatly reversed. This should help
this falls foliage outlook, allowing for more in the way of vibrant color. But
that will greatly depend on the early autumn weather patterns.

I’ve seen some outlets
posting detailed winter outlooks. Although it’s several months away yet, some
have been wondering what I think about winter 2021-2022. I’m not going to go
into a lot of detail. Frankly that would be irresponsible as there is no way to
know with any kind of accuracy how everything is going to come together.  But there are a few hints in the pattern and
teleconnections that are interesting.  There for I will talk a little about what
these little signs could indicate.

When we’re in La Nina it
favors the build-up of colder than normal air over Alaska and western Canada.

When we’re in La Nina, New
England, Most of New York State into northern Pennsylvania along with the Upper
Midwest tend to see colder than average temperatures. Likewise, the Southeast
and Mid-Atlantic tend to see warmer-than-average temperatures during a La Nina
winter.  This is especially true for the
Great Lakes into New England during the second half of the winter season.

When we look at similar years with the same general conditions. 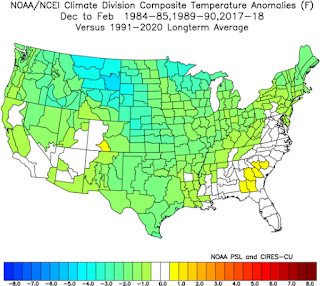 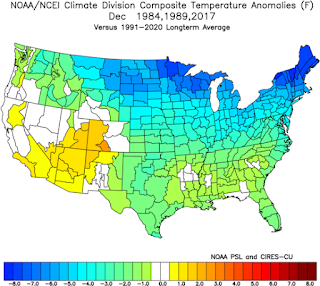 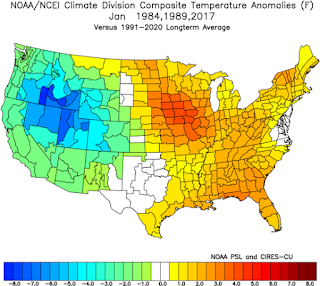 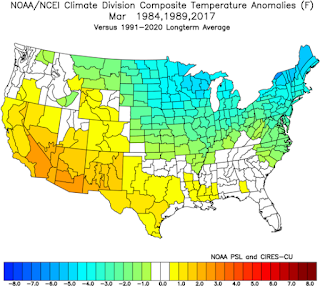 I’ve talked about the cold May
to busy Atlantic hurricane season and cold Decembers and generally cold overall
winters correlation. When we add in years that were around a La Nina Modoki, we
see the Decembers tend to be quite cold, with January becoming warm overall
with Februarys becoming overall seasonally average.   El Nino
Modoki’s tend to be snowy. La Nina winters do seem to be a little less snowy. 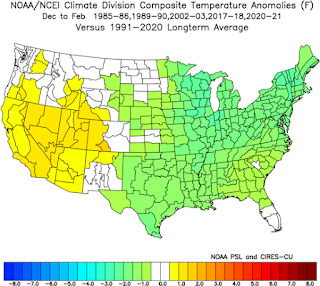 So overall based on the Idea of La Nina along with the cold May, this winter looks
to be overall generally colder, with what looks to be overall snowfall amounts
around seasonal average.

But we have to remember there
are other ocean and atmosphere cycles and teleconnections like the Quasi-Biennial Oscillation (QBO), Eastern
Pacific Oscillation (EPO), Arctic Oscillation (AO), North Atlantic Oscillation (NAO),
and many others, that are also factors in how the winter season generally turns
out. I won’t know how all of those things will work into the winter equation
for a while yet.

Well, that’s it. Please give
me feed back on what you think. And as always, feel free to ask me any
questions y’all might have. If you like what you see, please share.