This is in no-way a forecast, it is
just a broad overview of what looks to be trying to set-up. But it still
involves teleconnections and analog years. One thing we have to remember is everything
to do with weather is connected; many things contribute to the seasonal
patterns.

Well, the first hints of fall weather
have begun to arrive in the Northeast. Parts of New York State and New England,
are noticing some of the leaves changing and the nighttime temperatures have
been cooling, and while the Autumnal Equinox is still a few days away, beginning
on September 22, 2021 at 3:20 pm EDT. I thought I would post on what might be
in store for winter season, 2021-22.  I’ve
never posted this early for a winter outlook, so it should be fun to see how
things evolve.

The first snows for this season for
the CONUS, will be falling across parts of British Columbia and Washington State
as a storm moves in from the Pacific. Then early next week the Pacific
Northwest, including Idaho Montana, and Wyoming, into parts of Utah and
northwest Colorado. So winter is coming, like it or not!

When making a seasonal forecast is
hard to do anytime, one this early is incredibly hard, as many variables
are still changing.

Climatological winter is December, January,
and February. When we talk about a warmer or colder than average “winter,” it’s
the average temperature departure over these three months. However, when it
comes to seasonal snowfall, we take the entire October-April snowfall into
account (and sometimes into May!).

Here is the list of winters I’ve
identified as possible analogs for the coming winter. As we get closer these years
will be adjusted, as the pattern evolves.

The ENSO consist of El Nino and La Nina
which are to opposite phases of the naturally occurring climate Variation.

Put simply, El Nino is when water in
the equatorial Pacific Ocean is warmer than normal, and La Nina is the
opposite: when that water is cooler than normal. Generally speaking, for the
northern United States in the winter, El Ninos lead to warmer and drier
conditions, and a La Nina leads to cooler and wetter conditions.

It’s important to remember, whether
you’re in a El Nino, La, Nina, or Neutral it has a major effect on how cold and
snow are distributed. Also, no two are exactly alike, and can produce different
outcomes based on how everything is interacting. 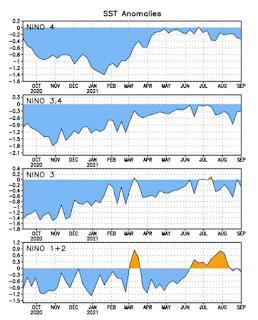 Right now, we’re in ENSO Neutral, the
graphic shows that in Nino region 3.4 the anomaly is around -0.3°C. In fact, the
Nino index values ranged from -0.2°C to -0.3°C
across all Nino regions; which is on the cool side of neutral.

While the Tropical Pacific remains in
a neutral state, there is a good chance we will enter La Nina later this fall
into winter. The Climate Prediction Center has us in a La Nina Watch. 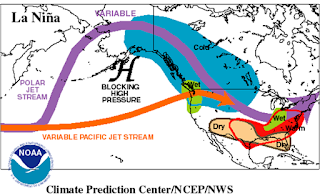 Sea Surface Temperature (SST) in the
east-central Pacific have dropped to slightly below average and most of the
global key atmospheric variables are fairly constant with neutral ENSO
conditions. These neutral conditions should continue for the next couple of
months, while slowly siding toward an La Nina.

When we look at the official CPC/IRI
outlook, it shows us slipping into La Nina conditions during the fall into
winter, but then by mid-winter slipping back into neutral conditions. 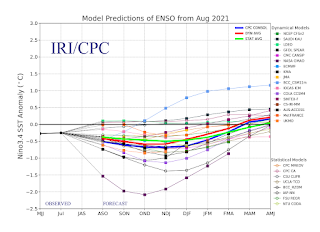 La Nina tends to bring in colder and wetter
winter weather to the northern United States, including The Northeast. That’s
because of the position of the Polar Jet, this creates a lot of variability,
but it also allows for more in the in the way of frequent waves of colder
weather, which can have a big impact on snowfall.

Last winter is an analog, which means
we’re basically in a continuation of winter 2020-2021, with a back-to-back La
Nina.  There is some correlation, that when we have back-to-back La Nina’s,
the second winter tends to be less snowy leading overall lower seasonal
snowfall amounts. But other factors and storm tracks could act as a counter to
that.

The MJO is an eastward moving
disturbance of clouds, rainfall, winds, and pressure that crosses the tropics
and returns to its initial starting point. Typically, the cycle is 30 to 60
days, on average. The MJO is very variable and has wide-ranging impacts on
global temperature and precipitation patterns. The MJO is divided into 8
phases, each of which has a different impact on a region of the globe. While it
doesn’t cause a El Nino or La Nina, it does influence how fast they can develop
and how strong they can become.

I talk about the MJO a lot. This
Spring the MJO developed high amplitude from time to time, it also led to a
fairy chilly last part of Spring 2021. The MJO has also had a huge impact on
the Atlantic hurricane season, where it led to U.S. landfalls when it was in
the favorable phases.  Many of my analog
years had the same general idea of cooler Springs with active hurricane seasons.  The analogs show that many times winter gets
and earlier start in years like this.  The MJO pattern we’ve seen this year, is
telling me, we’re not done with the hurricane season by a long shot. So, the 2nd
half of October and November could become quite active.

There is a significant correlation between
the MJO, the rate of nor’easters, and the likelihood
of snowfall events Here in the Northeast and northern Middle Atlantic Region.
MJO phases 7, 8, and 1 on average tend to see
better chances of snowfall. MJO phases 4 and 5 seem to produce the opposite effect,
with snowfall likelihood reduced.

The Pacific Decadal Oscillation (PDO)
is a long-term ocean SST fluctuation of the Pacific Ocean. This variability
used to be a cycle that occurred every 20-30 years. During recent years the
oscillation seems to occur every 6-10 years; more study and research is needed
to know why and if this is going to become the new average.  The PDO is a big factor on the path of the
Jet Stream. This means it has a big impact on storm track. 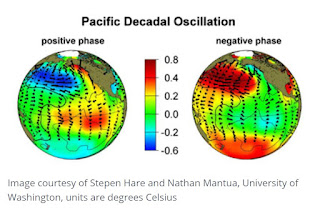 The North Pacific remains in the
negative phase of the PDO. This would suggest that the Jet Stream will be pushed
a little farther north. While the storm track could be more favorable, it would
also mean more variability in overall temperatures. Typically, the Eastern CONUS
including the Northeast sees overall colder winters during a positive phase,
and overall warmer winters during the negative phase.  When the PDO and the ENSO are in the same
phase; the PDO impacts are enhanced, particularly in stronger phases. We also
tend to see wetter winters when the PDO is negative. So, when added to the variability
of La Nina, snow amounts will be very dependent on the timing of the warm and
cold outbreaks.

The AMO involves tracking SST in the
North Atlantic. The AMO like other teleconnections has a warm and cool phase
with periods of approximately 20-40 years. It just so happens that our seasonal
snowfall does a nice job of tracking along with the AMO. The warm (positive)
phase on average produces snowier winters here in the Northeast, while the cold
(negative) phase tends to lead to below average snowfall. This winter is going
to be a positive AMO. We’re likely coming to an end of the current positive
phase. But we should still see a few more years before it possibly flips.

The NAO consists of two pressure
centers in the North Atlantic: one is an area of low pressure typically located
near Iceland, and the other an area of high pressure over the Azores. The AO is
a climate index of the state of the atmospheric circulation over the Arctic. The
NAO and AO are principal players in climate variability in the northern
hemisphere. These two atmospheric oscillations which generally operate in
tandem, have significant control over the weather pattern including winter storm
tracks and temperatures in the eastern CONUS.

There is a relationship between the AMO
and these NAO/AO decadal tendencies. When the Atlantic is cold (negative), the
AO and NAO tend more often to be overall positive, when the Atlantic is warm
(positive) on the other hand, the NAO/AO tend to be more often overall
negative. This means a better chance for high latitude blocking and enhanced
coastal storm activity in the Northeast and Middle Atlantic Region.

There is substantial intra-seasonal
variability of these indices that relate to other factors, such as things like stratospheric
warming and cooling events that can override other major teleconnections.

The correlation with the NAO and
seasonal snowfall is seen below for Boston. 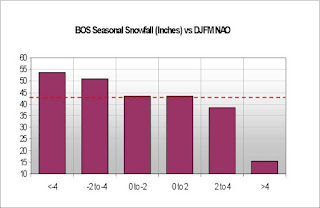 The EPO is similar to the NAO, it is a
variation in the atmospheric flow pattern across the eastern Pacific, as well
as Alaska. When the EPO is in a positive phase, the central and eastern CONUS
tend to experience warmer winters overall. When the EPO is in a negative phase,
a ridge in the upper levels of the atmosphere is present over the eastern
Pacific off the West Coast, which corresponds to cooler temperatures over
central and eastern North America. 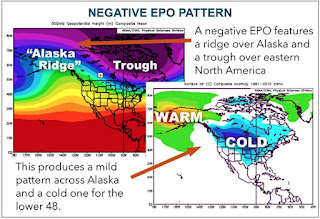 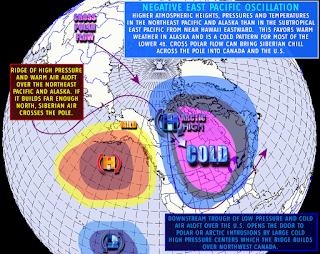 The EPO is looking to be overall
negative. This pattern will become very important during winter because the
negative phase of the pattern can open the door to very cold Arctic and
Siberian air into the US.

The QBO is an irregular periodicity
oscillation involving equatorial zonal winds between easterlies and westerlies
in the tropical stratosphere, with a mean period of 25 to 30 months to return to the starting state.

For this winter we look to be dealing
with an east based QBO.

So, what could
all of this mean for all y’all:

While we can draw conclusions overall
temperatures and storm tracks, we are still three months out and dealing with a
long-range outlook which can vary as La Nina is still developing and
variability does exist season by season. How strong this La Niña becomes is
also critical, and that remains to be seen over the next several months. Is it
possible we don’t dip into a La Nina? Yes, but I’m leaning toward the idea of a
weak to moderate La Nina.

Based on how things look to go, October
looks to be overall above average with temperatures. Then as we get into the 2nd
half of November, we should see the pattern adjusting to overall average to
slightly below average. I think winter is going to start early, with December
looking to be overall very cold, with bouts of snow.  As would be typical with a La Nina the winter
would be like a rollercoaster ride, going up and down.  January could end up somewhat mild, with
perhaps an extended January Thaw. February would see some cold returning especially
for the 2nd half of February, with March becoming cold and snowy.
The last several winters have seen winter extend into April, I would expect
this trend to continue.

Well, that’s it for now. This is only
a very early look at the overall pattern and what it seems to be signaling. Some
or all of this could change. As I’ve done with other outlooks I will release updated
outlooks as we move along toward winter 2021-2022.