The winter upper-level
weather pattern is becoming well established. So, it’s time to put the summer
and fall behind us.

Even
through the official 2021 Atlantic Hurricane Season doesn’t end until November
30th, the tropics are quiet and another named storm is looking unlikely. So, I
wanted to go over how the season basically went and how it compared to the
hurricane outlook I released back in May.

First let’s
look back that the statistics for 2020. Last year, saw the most active Atlantic
hurricane season in recorded history, with a total of 31 tropical cyclones, 30
named storms, 13 hurricanes, and 6 major hurricanes. There were 11 storms that
made landfall in the United States. The majority of those made landfall in the
Gulf of Mexico with three of them passing through Arkansas. 2020 had the 2nd
highest seasonal ACE in Recorded history, 2nd only to 1933. The
season broke numerus records.

Named
Storms 18-26, Hurricanes 6-13, Major hurricanes 3-6, U.S. landfalling tropical
cyclones of 6-10. I called for an Accumulated Cyclone Energy (ACE) value of
140-190. In the Outlook I also said the Northeast was at a heightened risk for
tropical cyclone impacts. 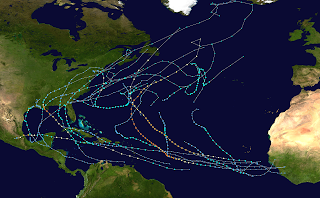 As of right
now, the 2021 Atlantic hurricane season has seen 21 named storms, seven of
which were hurricanes (Elsa, Grace, Henri, Ida, Larry, Nicolas and Sam).  The season had Four major hurricanes (Grace,
Ida, Larry and Sam). Eight landfalling U.S. named storms. Ace is standing at 145.1,
as of 18:00 UTC November 7.

So, the
season did fall within all the parameters I set back in the spring.

The
beginning of the season started busy. While not as early as last year’s first
storm, Arthur, Ana marked another early start to the Atlantic hurricane season,
forming northeast of Bermuda on May 22. There were four named storms that
formed in the month of June. The Atlantic Basin then shutdown for July, when no
new storms formed. August saw the tropical Atlantic wake back up leading to
five named storms forming. August included Major Hurricane Ida; she became a
Category 4 borderline 5 and made landfall in the Louisiana.  Ida caused 115 deaths and more then $65
billion in damage. September is historically the busiest month of the hurricane
season; that was surely the case this year. Nine named storms formed. Six of
the nine storms only reached tropical storm strength. Stronger storms included
Nicholas, Larry, and Sam. Sam was the most powerful hurricane of the season,
reaching category four status with winds sustained at 155+ mph; I think Sam
made it to Category 5, but that isn’t official. Luckily Sam made no landfall
and eventually dissipated over the north Atlantic. November has had only one named
storm so far. Tropical storm Wanda formed over the north Atlantic and
dissipated a few days later.

Overall,
the 2021 hurricane season was over active. But the intensity of the storms
ended up being closer to average.  This
year saw the entire official name list used. Making 2021 only the third time on
record, behind the 30 named storms of 2020 and 2005’s 28 named storms that this
has occurred. While we had 21 named storms, The ACE was only 145.1. ACE is the
only true measure of a season’s activity. Most of the storms that formed this season
were weak extremely short-lived storms.  Of the 21 storms, Larry and Sam made up the
bulk of this season’s total ACE.

I’ve seen
the main stream media going on and on about how active this season was, I’ve
seen some reports that said this is the 3rd most active Atlantic Hurricane
Season on record. 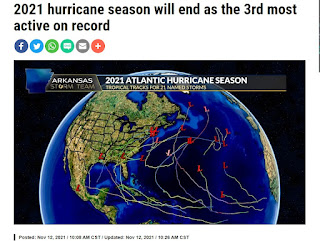 But is that really
true?

The most
active Atlantic Hurricane Seasons based on named storms.

The active
Atlantic Hurricane Seasons based on ACE.

Most people
think of a hurricane season’s activity based on the number of named storms.
While that is a good metric to use, a season’s true activity is measured by ACE.

ACE is a
measurement of a hurricane season based on each storm’s intensity and how long
it lasts. Its calculation is a little cumbersome but it gives the best
indicator of activity. is generally used to measure the combined duration and
strength of tropical cyclones. It is also a good metric for scientists to
compare storms against each other and across different seasons.

ACE is
calculated by squaring the storms wind speed in knots at six-hour intervals (advisory
issue times), then divided by 10,000. For example, a 35-knot (40 mph) tropical
storm for one advisory would have an ACE of 0.1225.

So, while
this hurricane season’s 21 named storms, places it 3rd on the list
of named storms. It is only listed at 28 based on ACE. So, in spite of what
several media outlets are pushing; it wasn’t really super active.