It is that
time of year for the spring flood outlook.

This is the
first of two scheduled outlooks for the Northeast and Middle Atlantic region.

Meteorological
spring runs from March 1 through the end of May.

October was
very warm, whereas November was cold with shots of snow. This pattern carried
into the winter.

Temperatures
were significantly above average across the region through the month of
December. Generally, the regional temperatures ranked among the top-five
Decembers since records began in 1895. December was also generally a
drier-than-average month for the Northeast.

January started off unseasonably mild. January
ended up being cold and snowy and for parts of the region it was one of the
snowiest Januarys on record. January was much colder than the 1991-2020
thirty-year average. But while January 2022 was a cold month, generally
temperatures are not getting as cold as they once did 30-40 years ago.

So far
February has been volatile. With the temperature pendulum making wide swings
back and forth.  Based on how I think the
pattern will evolve, February will likely end up slightly below average as far
as overall temperatures.

The overall
pattern this winter has seen a mostly positive North Atlantic Oscillation (NAO)
and arctic oscillation (AO). In the Pacific La Nina conditions in the
equatorial Pacific. Madden-Julian
Oscillation (MJO) is in Phase 3 this is a cold phase for February.  The MJO went into the cold phase in December
before retreating into the null phase, where it had no real influence, but
pattern remembered the earlier influence leading to the cold January. The
Eastern Pacific Oscillation and Western Pacific Oscillation have been the
dominate teleconnections this winter. They are the major reasons we’ve seen the
back-and-forth temperature pattern every 4 to 6 weeks.   Western and northern parts of the region and
the Middle Atlantic including the I-95 corridor with the exception of Philadelphia
have seen near average to above average snowfall to date. While a large part of
eastern Pennsylvania southeast New York State including the NYS Capital
District into western and central New England have seen below average to well
below average snowfall to date. The reason for the snowfall disparity is due to
the timing of the elements and storm tracks.

The CPC is
showing above average temperatures for the Northeast and Middle Atlantic
region.

The CPC is
showing above average precipitation for western New York State and western
Pennsylvania, with near average for the rest of the Northeast and Middle
Atlantic region. 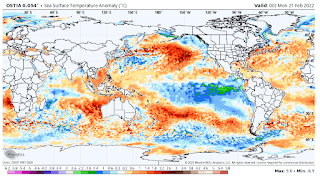 Temperatures were significantly above average across the region
through the month of December. Generally, the regional temperatures ranked
among the top-five Decembers since records began in 1895. December was also
generally a drier-than-average month for the Northeast.

January started off unseasonably mild. January
ended up being cold and snowy and for parts of the region it was one of the
snowiest Januarys on record. January was much colder than
the 1991-2020 thirty-year average. But January 2022 was an illustration that
even in a cold winter month these days, it’s on average not getting as cold as
it once did.

In a La Nina
wintertime pattern, the polar jet stream tends to dip farther south across the
continental United States. Resulting a better chance for cold and snow across
northern parts of the region. But the jet stream position does vary. La Nina is expected to stick around
for at least a little while longer, with the transition back to neutral
conditions most likely not taking place until early this Summer. One thing we
have to keep in mind, is that the Great Lakes also have a lot of influence on
the Region.

As I said above,
we’re in a 2nd year La Nina. There are some signs that show the
possibility for a return to La Nina conditions for next Fall into Winter
2022-2023.  That could allow for another
active Atlantic hurricane season, The Atlantic hurricane season does not
officially start until June 1, but a storm could form before the official season
gets underway. There is also a chance for above average tornado activity this
year.

Here is a
look at the stratospheric temperature forecast from NOAA. It shows the sudden
stratospheric warming event unfolding and bringing the Great Lakes and East
plenty of cold air as we head into March. 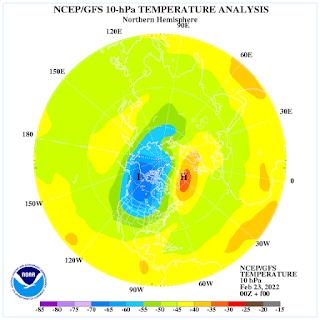 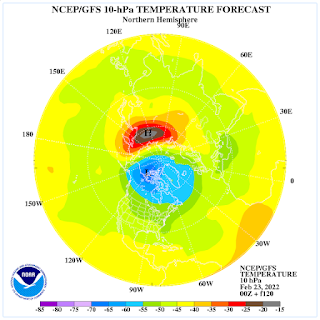 The MJO
phase diagram illustrates the progression of the MJO through different phases,
which generally coincide with locations along the equator around the globe.
RMM1 and RMM2 are mathematical methods that combine cloud amount and winds at
upper and lower levels of the atmosphere to provide a measure of the strength
and location of the MJO. When the index is within the center circle the MJO is
considered weak, meaning it has little to no influence. 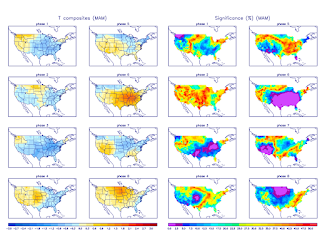 From here
the MJO looks to go into Phase 4, this is a cold phase for March. The American
GFS model takes the MJO into phase 5 and maybe phase 6. But the European ECMWF,
Japanese JMA, United Kingdom UKMET and most of the others keep in phase 3 or 4
than move it into the center circle (Null). So I don’t think the GFS has a good
handle on the pattern.  This time of year,
phases 3,4, and 5 are cold phases for March and April. As we saw in the end of
December, the atmospheric pattern could end up remembering the earlier MJO input.
If this does happen March would be colder than average overall.

The other
Pacific Teleconnections:

The Pacific
has been in the driver’s seat this winter. It has overridden the Atlantic
Oscillation and North Atlantic Oscillation this winter. There are several
reasons for that, not the least of which is warming global temperatures. 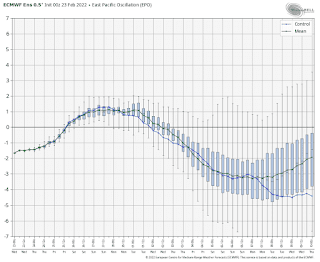 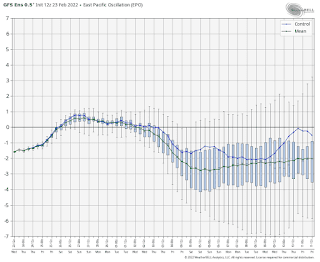 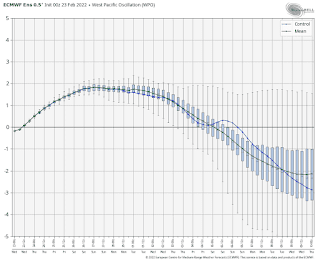 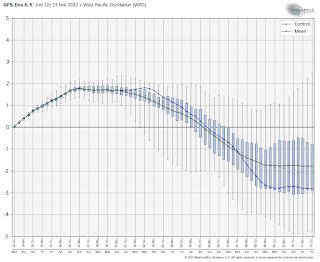 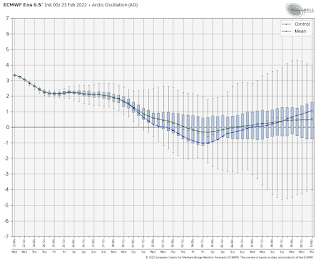 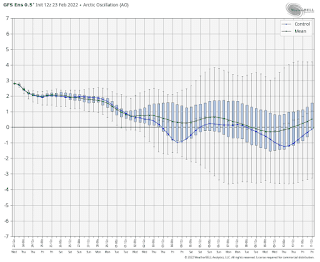 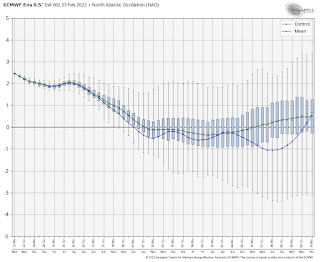 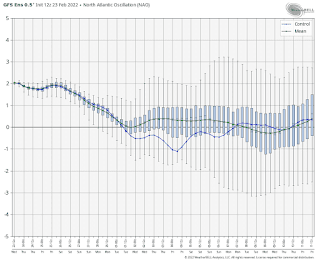 The AO and
NAO have been overall positive so far this winter. As I said, the EPO and WPO
have been overriding the AO and NAO. But the AO and NAO are looking to go negative;
with all these teleconnections cooperating with each other March into April
could be very cold indeed.

All of this
means that March into April will surely be colder than average overall.  With the cold will come snow opportunities,
how those chances work out and for who, will depend on the exact storm tracks.
But historically March is more than capable of delivering major snowstorms. So
we will see.

First taking
a look back at how much precipitation fell across the region before the ground
froze. The map from the Northeast Regional Climate Center (NRCC) shows the accumulated
precipitation (in) departure based on the 20th century average. The
map shows that Central into Eastern New York State saw slightly above average precipitation
for Oct through December, with most of the rest of the region seeing around
average to slightly below, while Maryland, Delaware and the Middle Atlantic
region saw below average precipitation. 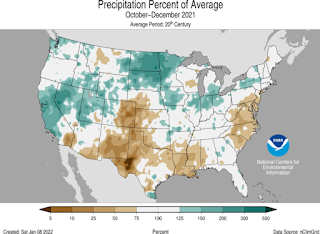 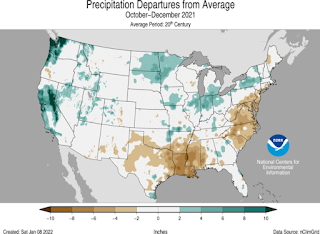 The maps
from NRCC shows that much of the region saw below average precipitations for
January. 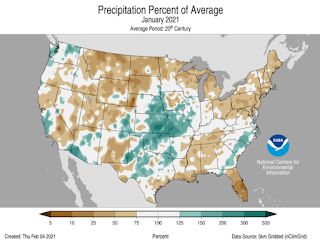 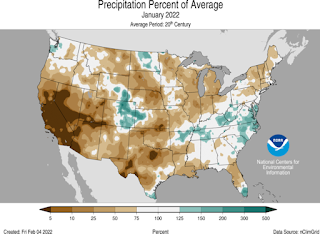 The maps
from WeatherBELL Analytics showing data from the Climate Prediction Center show
how much of the region is below average for precipitation over the few months. 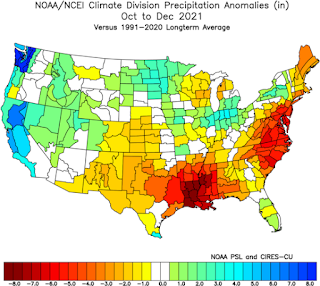 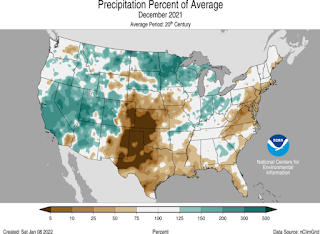 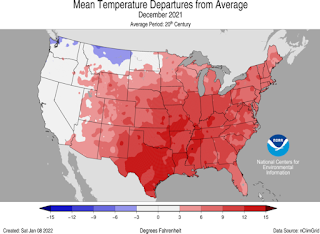 The map from
the National Operational Hydrologic Remote Sensing Center shows across most of
northern New York State and northern New England along with the higher terrain
in Central New England have a snowpack with 4 to near 14 inches of water
equivalent. 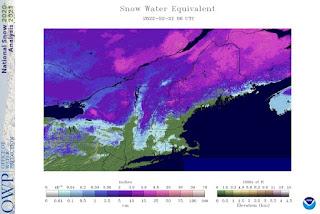 As a result
of all of this any spring flooding will be due to spring precipitation, rather
than from fall and winter conditions. It also means we will have a possible
drought issue this Spring.

Any spring
flooding will be due to spring precipitation than from fall and winter
conditions.

While Spring
2022 will likely see overall temperatures average to slightly warmer than
average. I think the CPC is overdoing the overall warmth.  March going into April is looking to be cold.
The 2nd half of April and May will likely see spring warmth. But I
don’t see Spring having well above average temperatures overall.

For the rest
of winter, I think the pattern will remain active. So, we will be seeing more
snow/mix and rain.  But I think the
amount of precipitation that makes it into the ground is going to be average to
below average.  So later in the Spring
going into Summer could see drought conditions become a problem.

That’s the
end of part one. I will be releasing part two during the first part of March. Part
two will go into more detail on temperature and precipitation patterns.