We’re around
seven and a half weeks from the start of the Atlantic hurricane season. The
Atlantic Hurricane season runs from June 1st thru November 30th.
So, it’s time to take a look at how I think the season will unfold.

The list of
names for the 2022 Atlantic hurricane season. If we end up with more than 21
named storms, the additional names will come from an alternate supplementary list.

A tropical
cyclone is the generic name given to low-pressure systems that form over warm
tropical or subtropical seas. When the NHC and I or other forecasters discuss
categories of tropical cyclones we use the Saffir-Simpson Hurricane Wind Scale.
On this scale (which IMO is outdated, but that’s a discussion for another time)
tropical cyclones are rated as follows.

Tropical
Depression: a tropical cyclone with maximum sustained wind speeds less than 39
miles per hour.   Also, in order to be
classified as a tropical depression, a tropical disturbance must develop a
closed surface circulation with organized thunderstorms.

The Atlantic Basin consists of the entire
North Atlantic Ocean, the Caribbean Sea, and the Gulf of Mexico.

Accumulated
cyclone energy (ACE): is used to express the energy used by a tropical cyclone
during its lifetime, the higher the ACE number the stronger the storm and
greater the potential for destruction it has.
The ACE of a season is the sum of the ACE for each storm and takes into
account the number, strength, and duration of all the tropical storms in the
season.

A look
back at the 2021 hurricane season:

The 2021 Atlantic Hurricane Season was the
third most-active season on record with 21 named storms, 7 of which were
hurricanes, 4 of which became major hurricanes.  We saw 7 landfalling tropical systems on the
U.S. mainland. It became the seventh consecutive year that a storm formed
before the official start of the season; when Tropical Storm Ana formed on May
22.  2021 was
the second consecutive year, and third time on record, that we’ve exhausted all
names from the hurricane list.

The season
saw two top end category 4 hurricanes, the most destructive was Hurricane Ida
which made landfall at Port Fourchon, Louisiana, on August 29 with winds at 150
mph. The 2nd was Sam, he was the strongest hurricane of the season, with
sustained winds of 155 mph, just shy of Category 5 strength. Based on satellite
data, in my option Sam most likely briefly strengthened to a Category 5, But he
weakened before the hurricane hunter aircraft could make it to the hurricane.  fortunately, Sam avoided all land and remained
a fish storm. He maintained major hurricane status for a whopping seven days.

Those of
y’all who follow my long range seasonal and special outlooks know I use analog
years. Analogs are when I compare ocean temperatures and atmospheric flow
patterns from past seasons and look for the ones that closely match the current
year setup. past seasons that featured weather patterns similar to the current are
used to try and figure out what’s likely to happen. Even with a warming planet,
I find that with some adjustments analog forecasting is still a valuable tool.

The main
parameters that will impact the 2022 Atlantic hurricane season:

Here’s a
look at the current global SSTs 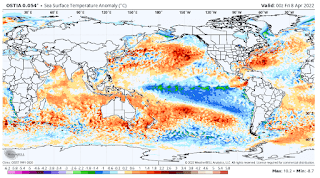 We know the
Atlantic plays a key role in the number of tropical storms in the Atlantic.

Looking at
the global SST chart

We can see
the SST in the Gulf of Mexico, Caribbean, and Central Atlantic are above With
SST along the East Coast into the northern Caribbean, and eastern Gulf of
Mexico are well above average. SST in the eastern Atlantic and eastern MDR are near-average;
but, the SST off the African Coast are below average. The MDR is where the
majority of tropical cyclones and major hurricanes form.  But these areas will warm during the Summer,
and will likely be very warm by the heart of the hurricane season.   The
water temperatures off the Southeast Coast, means there is a chance for
preseason tropical cyclone development near the US Coast and eastern Gulf of
Mexico.

Like last
year, we’re likely going to see an active African Monsoon Season. When we see
increased monsoon rains, there were more frequent intense hurricanes in the
western Atlantic Basin. We should also be looking to see a Stronger winds over
northern Africa, will help push disturbances off the West Coast of Africa, increasing
the risk these tropical waves would become tropical cyclones.

Atlantic
Multidecadal Oscillation. When it is in its warm (positive) phase, the
conditions in the Atlantic Basin are much more favorable for tropical cyclone
formation. So, we tend to see more strong storms form and increase the risk for
U.S. landfalls. 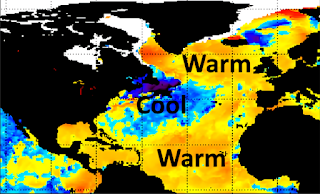 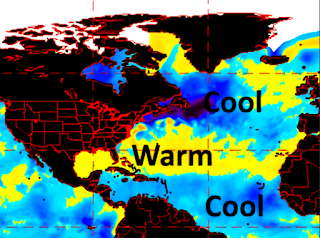 Current SST
in the North Atlantic 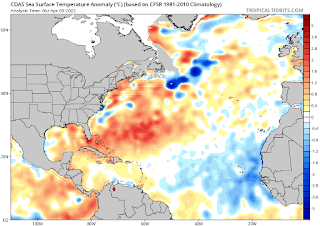 Looking back
at the global SST chart, we can see the AMO status isn’t as clear cut, while it
doesn’t match the classic warm or cool AMO phases, it is more of a hybrid. But
I see enough that, in my opinion, the Atlantic is still in a positive AMO
phase.

When we
compare this year’s SST in the Atlantic to last year at the same time, we see
that the overall look is similar. But the SST in the Gulf and in the Western
Atlantic are quite a bit warmer this year. 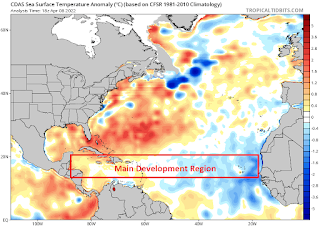 Another
factor will be the Bermuda Azores high:

The Bermuda
Azores high or, simply, the Bermuda high (BH) is a large semipermanent area of
high pressure in the Atlantic Ocean.  The
strength and location of the BH is a major factor in weather on the East Coast.
If the BH is far enough west, it can transport tropical heat into the Northeast
during the Summer. If the BH is particularly strong, it can bring widespread drought
conditions and heat waves to the East coast.

The Bermuda
high is also the primary steering mechanism for tropical storms and hurricanes
in the Atlantic.  As tropical waves form
off the coast of Africa, the clockwise flow around the high steers the waves
Westward.  As they move over the warm tropical
waters in the MDR of the Atlantic, they can strengthen into tropical storms or
hurricanes. If the BH is far enough north and west these can ultimately impact
the U.S.

During the
first half of the season, the center of the Bermuda high will likely be a
little south and well west of the Azores. As a result, the East Coast is going
to be at higher risk for tropical cyclones recurving out of the MDR into the
western Atlantic off the or into the Eastern Seaboard. Then as we get into
October, the BH will likely move closer to the Azores. This would mean the last
part of the season could see more in the way of staying off the US Coast, are
recurving away from the East Coast.

The ENSO
consist of a warm and a cool phase

The warm
phase is called El Nino, this is when SSTs in the equatorial Pacific are above
average. El Nino generally increases wind shear over the Atlantic Basin. The
higher amount of windshear lowers the risk for tropical development; it also
tends to reduce the chance of strong hurricanes. But there have been very
active and powerful hurricanes in the Atlantic during past El Ninos.

The cool
phase is called La Nina, this is when SSTs in the equatorial Pacific are below
average. La Nina generally decreases wind shear over the Atlantic Basin. The lower
amount of windshear increases the risk for tropical development; we also tend
to see stronger hurricanes during La Nina seasons.

As I
outlined in my Spring Outlook, last year’s La Nina was weakening, but it since
then has reversed and is currently restrengthen, especially in the Central
equatorial Pacific.  The reason of the
strengthen is due to the easterly trades increasing, this is driving the warm
SST to the west. The warmer waters pushing west is also allowing for upwelling
as the cooler subsurface water works its way toward the surface. 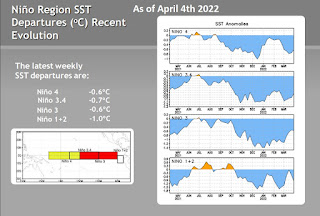 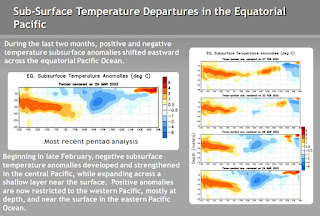 Currently we
have a weak La Nina in place it looks to head toward moderate. This current La
Nina is looking to be a Modoki La Nina, meaning it will be central based. As I
outline in my Spring Outlook, La Nina could very well extend into September/
October, it could even persist into next winter.

Typically,
during La Nina there is a higher chance for tropical cyclones to recurve up the
East Coast.

The Atlantic
is in its warm mode, meaning a better chance for more and stronger tropical
cyclones

La Nina in
the Pacific, means there is a better likelihood for more tropical cyclones with
a higher chance of impacting the Gulf and East Coast.

The warm SST
off the Southeast Coast increases the risk for preseason tropical activity.

Given the players
and overall parameters the 2022 hurricane season will likely see many weaker
storms out in the open Atlantic, that have a tendency move out of the MDR and be
fish storms (ones that say away from land). But as was the case last season, the
setup is going to allow homegrown tropical cyclones that form in the Caribbean,
Gulf of Mexico, and close to the East Coast.  This kind of setup can make for a very
dangerous and potentially deadly hurricane season; as they form close to the U.S, where they can rapidly intensify, making for short warming windows.

Other
outlets are starting to release their early thoughts on this year’s Atlantic
hurricane season. All these outlets will release updated outlooks as we get
closer to the 1st of June.

The National
Oceanic and Atmospheric Administration / National Hurricane Center won’t
release their outlook until May.

Everything
I’m looking at, is telling me the 2022 Atlantic Hurricane Season is going to be
another dangerous and active season, while it might not be quite as impactful
as last season, I do think it will be a close match up. With the parameters in
place the East Coast including the are at an increased Risk for tropical
cyclone impacts.

Here is a map
showing the area with the greatest potential for direct tropical impacts along
the U.S mainland U.S. The Florida panhandle and the coast of the Carolinas are
at the Greatest Risk. As for the Middle Atlantic Region and Northeast, are at a
Heightened Risk for impacts from tropical systems.  The Middle Atlantic Coast has a heightened
risk and eastern Long Island and along the New England Coast is at an Enhanced
Risk. 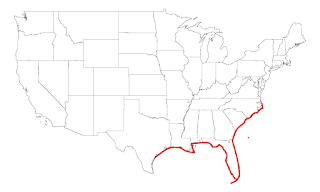 Well, that’s
it for part 1. I will be releasing part two sometime in May.