Hurricane 2022 Season is almost here. This is an extension
of my analysis from my 2022 Hurricane Outlook Part One. I will take you through
the reasons I think this is going to be a very busy season.

Part one can be found here.

The 2022 Atlantic Hurricane Season is just 27 days away. The
National Hurricane Center will begin releasing tropical outlook starting on May
15th.

The Last two Atlantic hurricane seasons were extremely
active and destructive. Both seasons saw named storms that were well above
average. Named storms refer to tropical storms, subtropical storms, hurricanes,
and major hurricanes. Everything I’ve been looking at, is telling me to double
down on my thoughts about this upcoming season being very active.

So, let’s look at what I think this season will bring.

Looking at the SST chart we can easily see those cooler than
average waters in the Central and Eastern Tropical Pacific.

Continue to run above average, especially in the Gulf of
Mexico (GOM), Caribbean, and western Atlantic, particularly off the Eastern
Seaboard.  These are the places that
typically see early season development. The SST off the West Coast of Africa
are still a little below average.

The SST in the Atlantic are warming quicker than average.  The Main Development Region is very warm,
especially considering we’re still almost a month away from the start to the
season. 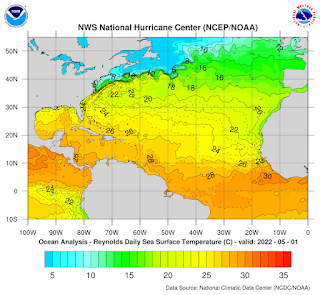 The SST in the eastern into central equatorial Pacific well
below normal.  Meaning we’re in a la
Nina. In fact, the La Nina is continuing to intensify. During the last four
weeks La Nina conditions have strengthened across most of the equatorial
Pacific.

Here is a look at SST anomalies
across the eastern and central Pacific: 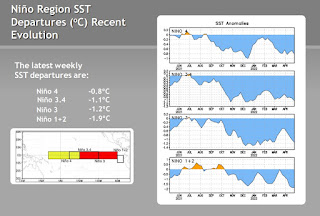 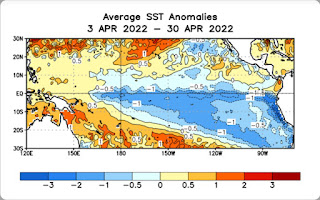 SST departures from average across the equatorial Pacific
over the last 4 weeks: 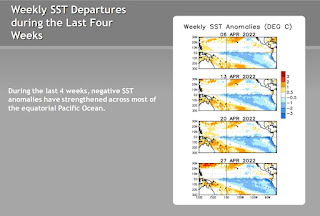 Sub-Surface SST anomalies across the eastern and central
Pacific: 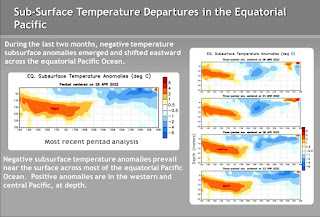 This La Nina is going to be with us at least through August.
Looking at the IRI/CPC model predictions
for the Nino 3.4 region It shows La Nina conditions hanging around as we
approach Winter 2022-2023.

The Southern Oscillation Index or SOI is a standardized
index of the barometric pressures over Darwin, Australia and Tahiti. It
measures fluctuations in air pressure occurring between the western and eastern
tropical Pacific. The SOI is a tool used to assess the strength of the ENSO. The
index scale ranges from about +35 to -35 using the Troup method of calculation
used on Long Paddock. Generally, a value of -13 or less is considered a
weak La Nina, values of -15 to -25 are moderate La Nina, a value greater than
-25 is considered a strong La Nina.

When we look at the current SOI index values, we can see
April saw the SOI squarely in moderate territory. With the stronger than average
trade winds continuing over the Pacific for the foreseeable future, there’s no
sign this La Nina is going to ease. 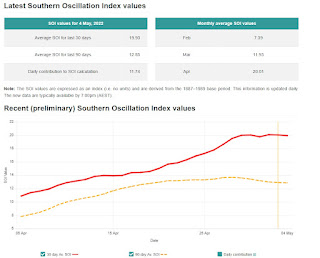 This will have an impact on upper-level wind patterns in the
Atlantic Basin.

During 2018 we experienced neutral ENSO conditions, then for
2019 we moved into a weak El Nino. Then for 2020 and 2021 we had moderated La
Nina conditions; The La Nina contributed to the development of very active
hurricane seasons, so 2022 is looking to be moderate to possibly strong, making
it a triple dip La Nina. Triple dip La Nina’s are very rare, but they do occur.

As I said in part one, La Nina has a tendency to increase the number of
tropical cyclones in the Atlantic, and also increases the odds of stronger
tropical cyclones.  Being in a La Nina,
doesn’t guarantee a busy season, but it does increase the odds.  So, we have to look closer into the crystal
ball to find other clues.

In another Facebook weather Group, the subject was raised
about the three past triple dip La Nina’s 1954 – 1956, 1973 -o 1975, and 1998 –
2000 and how the third consecutive season ended up with below average Atlantic
hurricane seasons.  The ACE values in the
Atlantic worked out like this: 1956: 57, 1975: 76, 2000: 119.  One of the comments was “So not only have triple
dip La Ninas NOT produced hyperactive hurricane seasons in the Atlantic, they’ve
actually tended to produce BELOW average activity in two of the three tries.
The 1975 one you might be able to throw out because the tropical Atlantic was
in such a cool state of the AMO during the 70’s that it’s probably useless, but
you can’t ignore 1956 and 2000. Both of those seasons followed very active and
destructive years in the Atlantic in 1954 and 1955 and then again in 1998 and
1999, and they not follow up with the same sizzle despite a persistent La Nina
in the Pacific. Granted, this is a small sample size, so it could mean nothing.
But so far, in the limited data we do have, triple dip La Ninas have actually
not produced for hurricane weenies.” My response to this was “We can’t just
look at La Nina. We have to remember we had a positive PDO from 1978-1998 and
the AMO was negative from 1962 to 1994. Both of those had a negative impact on
Atlantic hurricane activity. This season we’re going to have this weak to
moderate La Nina a negative PDO and a positive AMO. All of that spells a very active
season.”

When we look at the SST anomalies for those hurricane seasons,
we can see the Atlantic was much cooler in those three years. 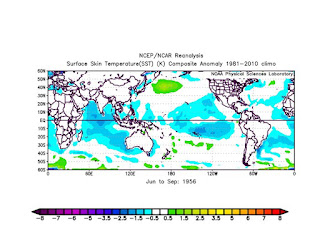 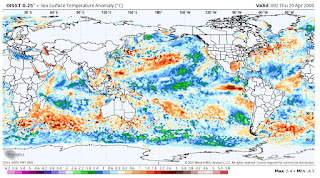 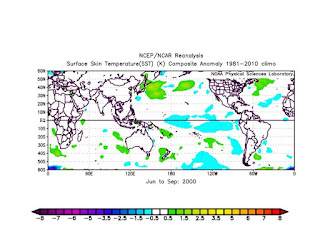 The cold PDO signal remains, the negative PDO is dominating
the Pacific along with the La Nina.

As I said in Part one, The AMO and Atlantic Basin SST have a
big impact on hurricane development. With the AMO still in a positive phase, it
will increase the risk for increased hurricane activity. The AMO was looking a
little atypical at the time I wrote Part One, but now it is taking on more of
the classic horseshoe shape of warm water in the MDR up across the central and
eastern Atlantic and into the northeast and northern Atlantic. Refer to Part
one to see my AMO analysis.

I touched on the Bermuda High in
Part One. Placement is going to be very important as to how the season works
out.  June July and August should see the
BH setup more west and a bit north into the western Atlantic.  I think it will be farther west than is
typical during the hurricane season. Then as we get into the second part of
August and September, we should see the BH start to slowly retreat east into
the central Atlantic. For October and November, the eastward movement should
continue.  So, the first half of the
season will feature tropical waves rotating closer to the Caribbean into the
Gulf and off the East Coast. Then as we get into October and November, we
should see tropical cyclones more or less recurve away from the East Coast out
into the open Atlantic. 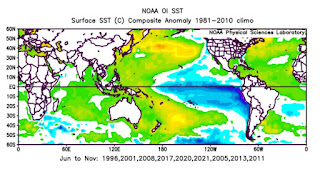 When we look at a composite of these analog seasons, we can
see that match up very well to the current global SST anomalies.   They
also match up well with the EURO seasonal SST anomaly forecast. 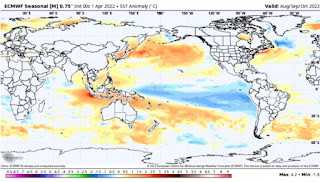 Springtime conditions are an important tool when trying to determine
how the hurricane season might work out.

There is a correlation between temperatures in May and
Atlantic hurricane activity and landfall chances in the U.S.  When we look back at cold mays here in the
Middle Atlantic and Northeast, we seem to see a greater chance for an active
season with greater chances for U.S. landfalls.

Looking back at 15 analog years 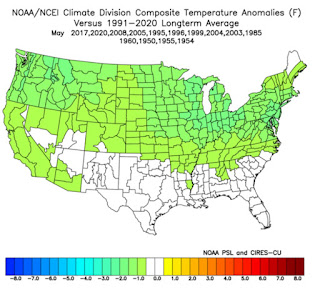 Now look at these Warm Mays (which would be the antilog). We
have 10 samples: 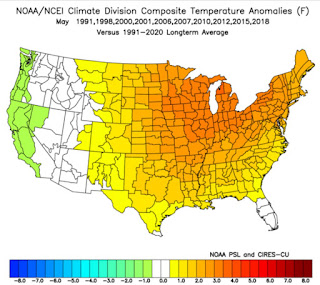 Those ten analog years saw only two Major hurricane U.S.
landfalls. So, we can see there is a much greater chance for landfalling
hurricanes on the U.S during cooler Mays, if this May ends up cooler than average, as I thinking
it will overall, it’s going to be a well above average and wild season.

For an active hurricane season, you need higher pressure to
the north and lower pressure to the south. When we look at the seasonal
forecast model of the 500mb anomalies, we can see that looks to be the case. 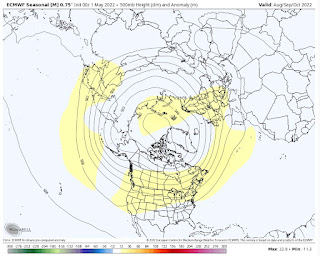 We have very warm SST in the northwest Atlantic. If we get a
fast-moving storm, it will try to move toward that area. This means, the
Northeast is at a higher risk for tropical impacts than either 2020 or 2021.

This is going to be an active season with significant to hyperactive
tropical activity in the Atlantic Basin. The overall season, we should end up seeing
similar to impacts to 2021. Last season saw 19 named storms in the Atlantic. I
think we have a good chance to due slightly better than that this season.

This could end up being a more active Cape Verde season than
we’ve seen over the last few years.

The Gulf of Mexico has the highest risk for landfalling
system with the Southeast and Middle Atlantic Coast not too far behind. The
East Coast (including the Northeast) is at a slightly higher risk for
landfalling tropical cyclones then we were for the 2021 season. The Bahamas is
also going to be at an above average risk of landfalling systems.

My call for the 2022 hurricane season is 20 to 25 named
storms, 10-14 hurricanes, 5-8 major hurricanes. The U.S could see 3-6 landfalling
tropical systems this season, at least one of them being a major hurricane. The
way the models and other factors are shaping up this season should see an ACE
value of 150 -210.

This could end up being a more
active Cape Verde season than we’ve seen over the last few years.

The images shown are curtesy of, Tropical Tidbits, Weather
Bell, and The National Oceanic and Atmospheric Administration (NOAA/NCEP)

One last thing, as is the same every hurricane season, all
y’all should be prepared with a hurricane plan, that includes evacuation routes
and places to stay at that are out of the storms track.  You should also have supplies that include
food, water, medicine, batteries, etc. Make sure all insurance documents are
updated and you have copies to carry if an evacuation is necessary. CD or
photocopies of important documents such as birth/marriage, certificates and
titles. Regardless of how active the season, we always should prepare, it only
takes one storm to have a devastating impact.

If May ends up warmer than I think, I will most likely release
a small update for the Hurricane Season toward the end of May.

These are the analog years I’m looking at. 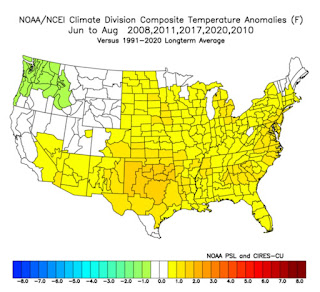 Based on the analog years, temperatures for June through
August will be overall above average for the Mid-Atlantic Region and slightly
warmer than average for the most of the Northeast. But northern New England
will likely see overall temperatures end up closer to average when all is said
and done.  We will see some heat waves.
But I don’t really see a lot of extreme hot and dry
weather.  Precipitation should end up
average over most of the Northeast and slightly above average for the Middle
Atlantic and along the East Coast.