RADAR CHECK: Large areas of rain along with a few thunderstorms continue to increase across Alabama this afternoon thanks to deep moisture in place, and a broad surface low over Southeast Louisiana. Look for occasional showers through tonight along with some thunder; some spots will see heavy rain. Temperatures are mostly in the 77-81 degree range at mid-afternoon.

The weather will stay somewhat unsettled over the weekend… expect more clouds than sun tomorrow and Sunday with scattered to numerous showers and thunderstorms both days. No weekend washout, but be ready for occasional showers. Highs will be close to 80 degrees.

NEXT WEEK: Dry air begins to push into the state Monday; the best chance of showers will shift to East and South Alabama. Then, the refreshingly dry airmass will settle in here Tuesday through Thursday with sunny days, cooler nights, and lower humidity. Many communities across North Alabama will drop into the 50s early Tuesday and Wednesday morning. There is evidence some risk of showers could return late in the week… See the daily Weather Briefing video for maps, graphics, and more details. 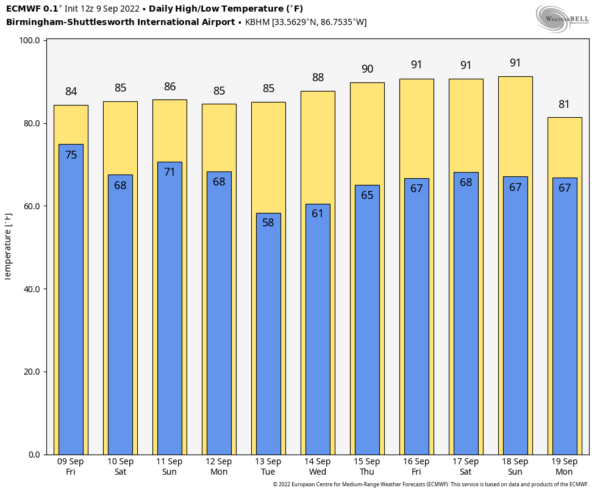 TROPICS: Hurricane Earl, with winds of 100 mph, is moving away from Bermuda this afternoon, and will become post-tropical in the North Atlantic over the weekend. NHC is monitoring three tropical waves in the central and eastern Atlantic, but for now those only have a low chance of development over the next five days. Still no evidence of any tropical systems threatening the U.S. Gulf Coast or Atlantic Coast for the next 7-10 days. 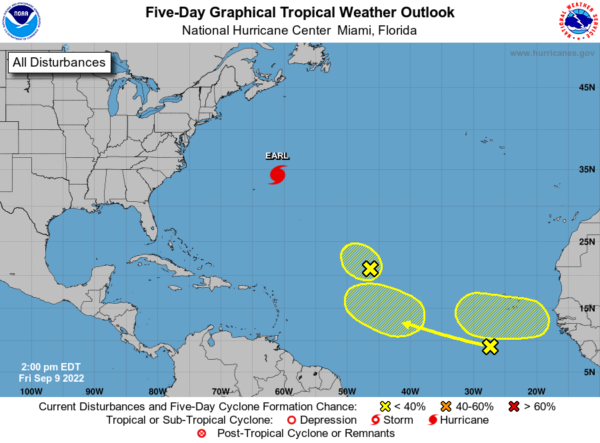 FOOTBALL WEATHER: For the high school games across Alabama tonight, showers are likely with temperatures in the 70s.

Tomorrow, Alabama will take on Texas in Austin (11a CT kickoff)… the sky will be sunny with temperatures rising from near 90 at kickoff, into the mid 90s during the second half.

Auburn will host San Jose State tomorrow evening at Jordan-Hare Stadium (6:30p CT kickoff)… the sky will be mostly cloudy with a shower possible during the game. Temperatures will hover in the mid to upper 70s.

UAB plays at Liberty Saturday in Lynchburg, VA (5p CT kickoff)… the sky will be mostly cloudy with a few showers possible during the game; temperatures will fall from near 75 at kickoff to near 72 by the final whistle.

ON THIS DATE IN 1965: Hurricane Betsy slammed into New Orleans on the evening of September 9, 1965. 110 mph winds and power failures were reported in New Orleans. The eye of the storm passed to the southwest of New Orleans on a northwesterly track. The northern and western eyewalls covered Southeast Louisiana and the New Orleans area from about 8 PM until 4 AM the next morning. In Thibodaux, winds of 130 mph to 140 mph were reported. The Baton Rouge weather bureau operated under auxiliary power, without telephone communication. The storm’s erratic nature, coupled with its intensity and minimized preparation time contributed to making Betsy the first tropical cyclone in the Atlantic basin to accrue at least $1 billion in damage.

Look for my next Weather Briefing video here by 6:00 a.m. Monday… enjoy the weekend!