The feared occurrence happened.  A major new fire is growing rapidly on the western slopes of the central Washington Cascades.  Now known as the Bolt Creek fire, this human-initiated fire is being stoked by strong easterly winds and low relative humidity.   And the huge smoke plume is headed towards Everett and the north Sound.

Take a look at the latest visible satellite imagery (for around 12:30 PM).  You can see the smoke plume from the Bolt Creek fire…heading northwest directly over Everett.  To the south, the large Cedar Creek Fire in the central Oregon Cascadses has spread smoke northwest towards the Long Beach Peninsula.    That smoke will move northward over central Puget Sound by dinnertime.

The Bolt Creek fire formed overnight when very strong easterly winds developed.  No lightning, so this is human-initiated.  The fire is so vigorous that it has a pyrocumulus right over it (a thunderstorm-like deep convective cloud forced by the fire) and is even apparent in the Camano Island weather radar (see below). 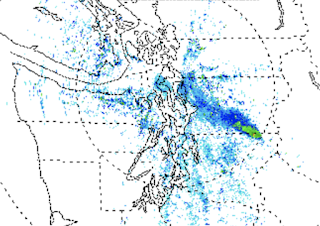 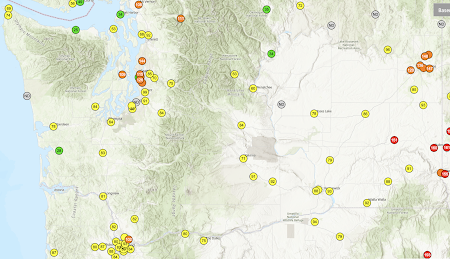 You want to be impressed with the profound effects of this downslope easterly flow?  Below are the wind, wind gust, temperature, and relative humidities at 7 AM around Enumclaw, in the Cascade foothills. 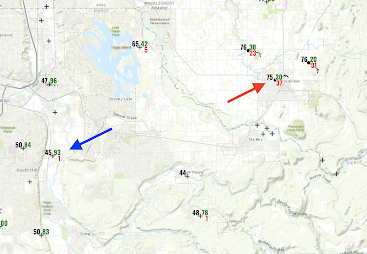 The easterly winds are causing temperatures to spike upwards in western Washington, particularly downstream of terrain barriers. 60s and 70s near the water of Northwest Washington, lower 80s over the central and southern Sound, upper 80s to 90 near the Cascade foothills. Around 90F downstream of the Olympics. 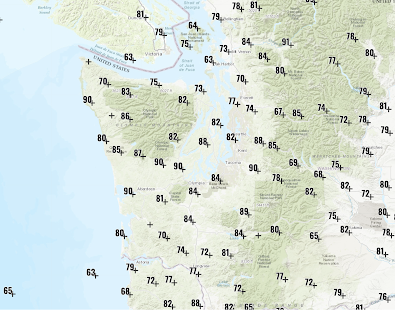 The easterly winds will greatly weaken on Sunday, so expect a substantial cool down.

What about smoke?   Western Washington will be clearing by Monday.     Take a look at the HRRR smoke model forecast below.   By 2 PM today, the Oregon smoke plume is extending into SW Washington. And by 10 PM, substantial smoke from it will be over Seattle! 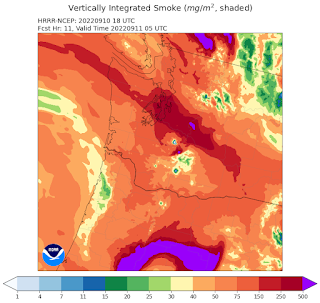 Plenty of smoke (mostly high) will be over the region at 9 AM Sunday. 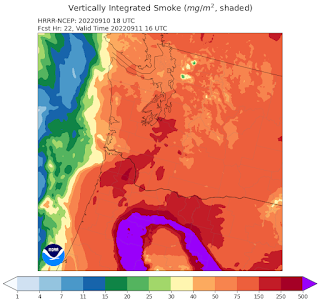 But by Monday morning, flow off the Pacific will be rapidly moving the smoke eastward. 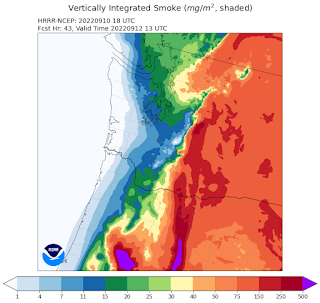 Next week the temperature will cool into the lower 70s, followed by 60s.  Warmth will become a memory.

Finally, we should consider the poor folks around Portland, where over 30,000 customer have had their power turned off to prevent powerline-initiated wildfire ignition.   It seems to be working.  But they are dealing with no AC, food going bad, no lights, and more.  Should be able to safely re-energize them tomorrow.