A few weeks ago I wrote about clearing tomato plants, and mentioned our hoophouse troubles with nematodes. Nematodes are tiny soil-dwelling worms that have a wide host range and are hard to control. They move only 3’–4′ (1–1.2 m) per year on their own, but people move them on shoes, tools, etc. We have had peanut root-knot nematodes (Meloidogyne arenaria) since 2011 when we found them in spinach transplants we were growing for outdoors in early spring.

My article on nematodes in Growing for Market  in November 2014 describes our discovery of the beasties and our first attempts to deal with them.

In my August 2014 post Good news – great hoeing weather! Bad news – more nematodes in the hoophouse I wrote about solarization to fight nematodes in our hoophouse (scroll down to the end of the post). The post includes a photo of our first attempt at solarizing – a  bit of a How Not To! Be sure to use UV-inhibited polyethylene. This year we somehow got some construction plastic mixed in. It doesn’t work! It goes cloudy (thus not heating up the soil) and it shatters into little pieces.

There is info on dealing with nematodes from Garry Ross in Hawaii, where nematodes are a fact of daily life, in my post Cold weather, snow, thinking about nematodes from February 2015.

My most thorough blogpost about nematodes was in 2018 for Mother Earth News:  Managing Nematodes in the Hoophouse.

My post Solarization and crop choices to fight nematodes in August 2019 includes a photo of a much better way to solarize an individual bed. In that post I gave a list of nematode-resistant food crops, and also talked about cover crops. There is a photo of nematodes on cucumber roots there too).

Most resistant and most helpful are the Juncea group of mustards. I did some research into more Juncea options in Solarization and crop choices to fight nematodes. We don’t like very pungent greens, so we have not yet taken the route of planting a whole bed of Juncea types. Instead we have mapped and flagged the nematode-infested areas of our beds, and try to be mindful of what we plant in those spots. Three of our seven beds have no nematodes so far.

This year we looked at the nematode map we had made and decided to focus our attention on the bed with the highest number of nematode patches, and grow the most resistant winter crops (of the ones we like to grow) there. That’s the frilly mustards (Ruby Streaks, Scarlet Frills, Golden Frills, all Juncea mustards, and Mizuna, a Japonica mustard), Yukina Savoy (variously reported to be Brassica juncea,  Brassica rapa pekinensis, and Brassica rapa), and Russian kales (Brassica rapa).

See the post with info from Gerry Ross I mentioned above. We have previously tried for a “Two years good, One year bad” strategy. This was to grow nematode-resistant crops in the infected areas for two years, then try risking one year of susceptible crops. That was a bit demanding on careful management, and we haven’t kept that up.

A reader asked about cover crop choices to fight nematodes. In June 2019 I wrote about using marigolds, sesame, Iron and Clay cowpeas as warm-weather nematode resistant cover crops. We’ve also used winter wheat (in winter!), and white lupins (not worthwhile, in my experience). See that post for a few other ideas on nematode-fighting cover crops, and why we decided against some options. At that time, we decided not to grow sunnhemp (Crotolaria) because it is poisonous, although newer varieties of Crotolaria have lower toxin levels. More recently we have been growing sunnhemp, after I saw it growing so well in North Carolina. It is a warm-weather legume, so it is feeding the soil while tackling the nematodes. It does grow tall in the hoophouse, and we have taken to chopping it down with hedge shears to an ergonomic elbow-height every few weeks whenever it gets too tall. The cut tops create a nice “forest-floor” mulch effect. You can almost feel the extra organic matter nurturing the soil! (High OM levels deter nematodes.) 60-90 days to maturity.

We previously used soybeans as a short-term leguminous summer cover crop, but they do not offer the nematode resistance. Iron and Clay, Mississippi Silver and Carolina Crowder cowpeas are all nematode-resistant and can be grown in summer instead of soybeans. Sesame is a legume that is particularly good against peanut root-knot nematodes.

See Our Organic Integrated Pest Management post for an organized approach to pest management, including nematodes.

A Florida reader gave me information about partridge peas, which I have not yet tried: After terminating cool-season brassicas and celery between April and June, their late spring sowing of partridge peas were too late this year to be productive, because the hard seed was very slow to germinate. Partridge pea could be a good cover crop for mid- to late-summer, if you scarify those hard seeds to speed germination.

Some cover crops can be alternate hosts for pathogens like cercospora, rust, or bacterial leaf spot, so be on the lookout for new problems while solving old problems. In the deep south, beans, yard-long (asparagus) beans, and cowpeas can succumb to heat, nematodes, rust, bacterial spots, and other pathogens and pests. Senna (tall) and Partridge pea can provide “chop-and-drop” organic matter as sunnhemp does. Sunn Hemp can host foliar pathogens (some possibly seed-borne), in Florida, and does not reliably form nitrogen-fixing nodules on the roots, even when inoculated. Even so, it is useful as a fast warm season green manure cover. 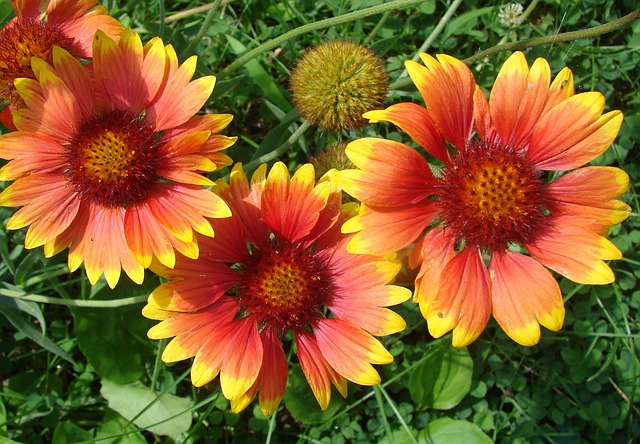 The flower Gaillardia (blanket flower) is a quick-to-compost, chop and drop option for late winter to late spring, It decomposes quickly, and can provide a quick green manure. Gaillardia is nematode-resistant, great for beneficials and pollinators, but is susceptible to some foliar pathogens later in the season. You can sow Gaillardia in August, or even later in fall for early spring flowering.

Due to climate change, and the more year-round activity of nematodes, pathogens, and pests in Florida, they’ve been including more nematode-resistant grasses into their rotations. We all need to be thinking more about warmer-climate options, as climate change continues to push pathogens and pests farther north, earlier each year.