Kansas is one of the few states that has resisted the trend to legalization of pot. Our governor wants to start medical weed, which she says, “will be a good start.” Start to what? A huge increase in stoned people? 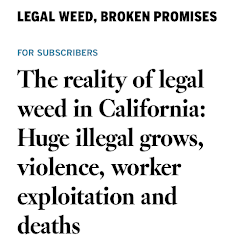 In 2012, Colorado legalized marijuana. In the decade since, 18 other states have followed suit. As billions of dollars have flowed into the new above-ground industry of smokable, edible, and drinkable cannabis-based products, the drug has been transformed into something unrecognizable to anyone who grew up around marijuana pre-legalization. Addiction medicine doctors and relatives of addicts say it has become a hardcore drug, like cocaine or methamphetamines. Chronic use leads to the same outcomes commonly associated with those harder substances: overdose, psychosis, suicidality. And yet it’s been marketed as a kind of elixir and sold like candy for grown-ups.