DRY WEATHER CONTINUES: Dry weather is the story for Alabama through the weekend with sunny warm days and fair pleasant nights. Highs will remain in the 86-89 degree range for most places through Sunday, with lows in the 60s.

No rain next week as an upper ridge builds across the Deep South. And, heat levels rise with temperatures reaching the mid 90s by the middle of the week… ten degrees above average for late September in Alabama. And, again this morning we still see no evidence of any high impact or big rain event for Alabama or the Deep South for the next 7-10 days. See the daily Weather Briefing video for maps, graphics, and more details.

FOOTBALL WEATHER: Clear weather is the story for the high school football games across Alabama tonight with temperatures falling into the 70s during the games.

TROPICS: Tropical Storm Fiona, with winds of 50 mph, is about 250 miles east of the Leeward Islands in the Atlantic early this morning. Fiona remains a sheared tropical cyclone this morning. The center of the storm is fully exposed to the west of a large area of deep convection over much of the eastern portion of the circulation. It is expected to remain below hurricane strength over the next five days, and a turn to the north begins early next week near Hispaniola. Most guidance continue to suggest that Fiona will remain east of the contiguous U.S… and is no threat to the Gulf of Mexico. 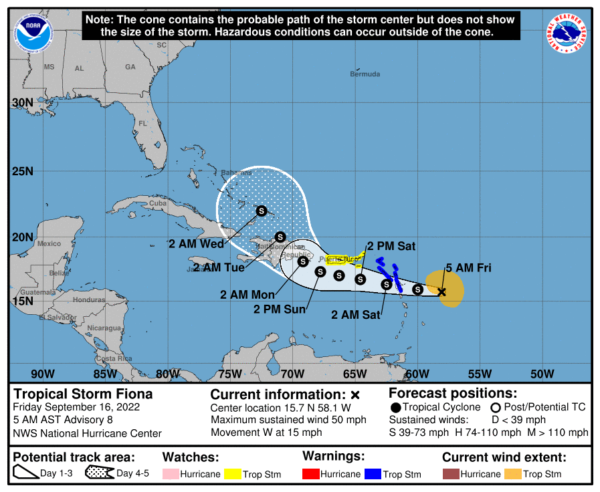 A weak tropical wave is in the eastern Atlantic, but the chance of development is low as it moves northward over open water. The rest of the Atlantic basin is quiet.

ON THIS DATE IN 2004: At 1:50a CT on September 16 2004, Hurricane Ivan made landfall just west of Gulf Shores as a upper end Category 3 Hurricane. Ivan packed winds of over 120 mph and a 10-15′ storm surge… the magnitude and extent of the damage and destruction over Baldwin County in Alabama and Escambia and Santa Rosa Counties in Northwest Florida exceeded that of both Hurricane Frederic (September 1979) and Hurricane Opal (October 1995).

Hurricane Ivan may rival the magnitude of damage and destruction caused by the Hurricane of 1926 which ravaged the counties east of Mobile Bay. A total of 8 deaths in the western Florida Panhandle (7 in Escambia County and 1 in Santa Rosa County) were the direct result of the storm.

A sailboat anchored in Wolf Bay in Baldwin county recorded a wind gust of 145 mph. Demopolis, over 100 miles inland, endured wind gusts estimated at 90 mph, while Montgomery saw wind gusts in the 60 to 70 mph range at the height of the storm. At the height of the outages, Alabama Power reported 489,000 subscribers had lost electrical power—roughly half of its subscriber base.

Just one Weather Briefing video today, but I will post fresh forecast notes on the blog this afternoon… enjoy the day!