HEAT LEVELS RISING: Dry weather will continue across Alabama through the weekend and into all of next week as an upper high builds over the region. Expect mostly sunny days, fair nights, and rising heat levels. Highs over the weekend will be in the 86-89 degree range for most communities, then we hit the low to mid 90s next week, about 10 degrees above average for late September in Alabama. Mornings next week won’t be as cool… lows will be close to 70 degrees.

Still no sign of any high impact or heavy rain event for Alabama for the next 7-10 days as this benign weather pattern continues.

FOOTBALL WEATHER: Clear weather is the story for the high school football games across Alabama tonight with temperatures falling into the 70s during the games.

TROPICS: Tropical Storm Fiona still features sustained winds of 50 mph, and is approaching the Leeward Islands this afternoon. Fiona could be very near hurricane strength as it approaches the southern coast of the Dominican Republic. The terrain of Hispaniola is likely to disrupt Fiona’s circulation, but the global models suggest that Fiona shouldn’t have much trouble reorganizing itself once over the far southwestern Atlantic, and the NHC forecast now calls for the cyclone to become a hurricane by the end of the 5-day forecast period.

Fiona will turn north early next week, and most likely will stay east of the contiguous U.S… and it is no threat to the Gulf of Mexico. 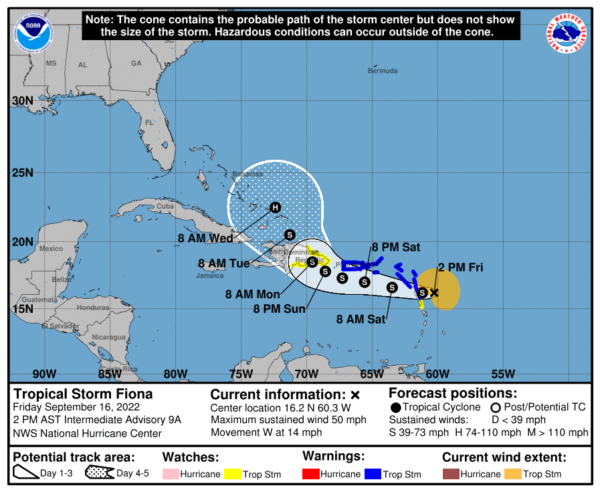 ON THIS DATE IN 2004: At 1:50a CT on September 16 2004, Hurricane Ivan made landfall just west of Gulf Shores as a upper end Category 3 Hurricane. Ivan packed winds of over 120 mph and a 10-15′ storm surge… the magnitude and extent of the damage and destruction over Baldwin County in Alabama and Escambia and Santa Rosa Counties in Northwest Florida exceeded that of both Hurricane Frederic (September 1979) and Hurricane Opal (October 1995).

Hurricane Ivan may rival the magnitude of damage and destruction caused by the Hurricane of 1926 which ravaged the counties east of Mobile Bay. A total of 8 deaths in the western Florida Panhandle (7 in Escambia County and 1 in Santa Rosa County) were the direct result of the storm.

A sailboat anchored in Wolf Bay in Baldwin county recorded a wind gust of 145 mph. Demopolis, over 100 miles inland, endured wind gusts estimated at 90 mph, while Montgomery saw wind gusts in the 60 to 70 mph range at the height of the storm. At the height of the outages, Alabama Power reported 489,000 subscribers had lost electrical power—roughly half of its subscriber base.

Look for my next Weather Briefing video here by 6:00 a.m. Monday… enjoy the weekend!