COOL CHANGE: Temperatures have dropped into the 50-55 degree range over parts of North Alabama this morning following a cold front that passed through late yesterday. The cooler air will continue to spread southward, and we project a high in the low 80s today, about 15 degrees cooler than yesterday. The sky will be mostly sunny, and the humidity will be low. Tonight will be clear and very pleasant with a low in the 50s over the northern half of the state.

THE ALABAMA WEEKEND: Tomorrow will be another sunny day with a high in the mid 80s. Then, on Sunday, we will bring in some risk of showers over the northern half of the state with another cold front approaching. Moisture will be limited, and rain amounts will be light. Otherwise, look for a mix of sun and clouds Sunday with a high between 83 and 86 degrees.

NEXT WEEK: The week looks dry and very pleasant; highs mostly in the 75-80 degree range, with lows in the 50s. Many communities over North Alabama could reach the mid to upper 40s early Wednesday morning. See the daily Weather Briefing video for maps, graphics, and more details.

FOOTBALL WEATHER: Perfect weather for the high school games across the state tomnight; clear and very pleasant with temperatures falling into the 60s.

Tomorrow, Auburn hosts Missouri at Jordan-Hare Stadium (11a CT kickoff)… the sky will be sunny with temperatures rising from near 77 and kickoff, into the low 80s by the second half.

Alabama will host Vanderbilt at Bryant Denny Stadium tomorrow evening (6:30p CT kickoff)… the sky will be clear with temperatures falling from 80 degrees at kickoff, into the low 70s by the final whistle.

TROPICS: Hurricane Fiona, with winds of 125 mph, is just northwest of Bermuda early this morning. It is headed for the Canadian Maritimes… hurricane conditions are expected in Nova Scotia by tomorrow morning. 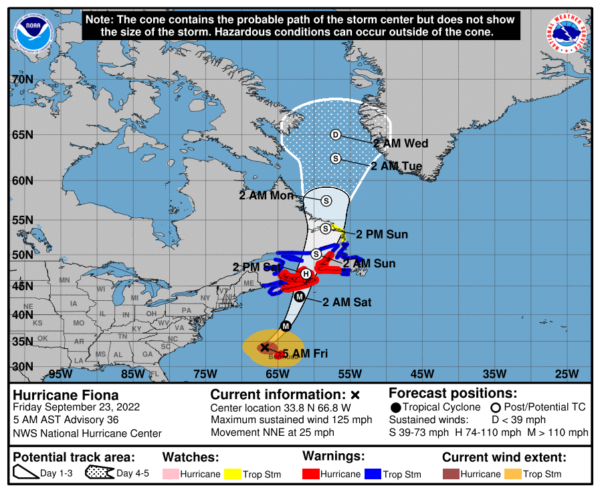 Tropical Storm Gaston remains near the Azores; it will remain far any other land mass over the next five days in the high latitudes of the Atlantic.

And, in the Caribbean, Tropical Depression Nine has formed.

Here are some key messages for TD 9…

*As the depression moves westward, it will move out form under an unfavorable upper air pattern and into lighter upper-level northeasterlies. However, it may take time for the low-level center to become better aligned with the convective activity, and thus only slow intensification is forecast over the next 24-48 hours. Still, it should become Tropical Storm Hermine soon.

*It is expected to become a hurricane by Sunday night as it approaches western Cuba.

*The new NHC forecast track brings the system into South Florida around Sanibel Island/Fort Myers late Tuesday night/early Wednesday morning. Potential land interaction with Cuba, and the potential for an increase in southerly shear by Tuesday/Wednesday may cap off the intensity before the system reaches Florida, but there is still some potential for Hermine to be a category three hurricane then.

*The core impact from Hermine, in terms of wind and rain, will be over the Florida Peninsula (not the panhandle). It is still too early to be really specific about the impact at any given point. Cities like Tampa, St. Petersburg, Orlando, Fort Myers, Key West, Miami, and Daytona Beach will certainly have some impact.

*Remember, the forecast can change with any tropical system, so stay tuned for updates! 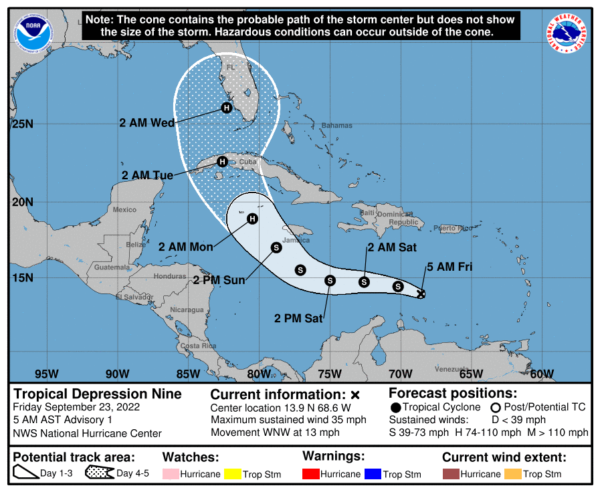 ON THIS DATE IN 1975: Hurricane Eloise made landfall on the Florida coast near Fort Walton Beach at category three strength. Upon making landfall in Florida, Eloise generated wind gusts of 155 miles per hour, which demolished hundreds of buildings in the area. The storm’s severe winds, waves, and storm surge left numerous beaches, piers, and other coastal structures heavily impaired. Wind-related damage extended into inland Alabama and Georgia

Look for my next Weather Xtreme video here by 6:00 a.m. Monday… but I will post fresh forecast notes here later today.