The theme in this blog is not landfall.

I want to discuss the beyond landfall possibilities.

Also the issue of Tampa Bay.

As it comes up in the media often…….

Never lock in on one scenario this far out…

…and remember this could have multiple US landfalls.

I want to put some thoughts out that haven’t been mentioned as much online and need to be addressed. So starting an Afternoon Blog that I’ll update at 5 PM. Everyone is asking where in Florida TD9 will make landfall. As a born and raised Miami girl I totally understand the concerns here and seeing as my family lived in Tampa since 1900 I totally get the concern for Tampa Bay. Before Tampa, they lived in Key West in the 1800s and every hurricane that has taken the track of many of the models is currently dancing and pirouetting through my head. That said, the hurricane that should form from TD9 is not Charley (mid August storm) and not the Tampa Bay Hurricane of 1921 that made landfall in late October.

This may not even be a Tampa Bay hurricane as many storms seem to aim towards Tampa and suddenly veer off to the South or the North to a landfall far away from the city built on Tampa Bay. A strong front dips further South and more often they are too far South for a typical front grabbing the storm set up.

Then we have Hurricane Irene that the NHC tracked to the West Coast of Florida yet it’s naked center was far from it’s intense rain that flooded Southeast Florida as seen by the graphic below from the NWS. 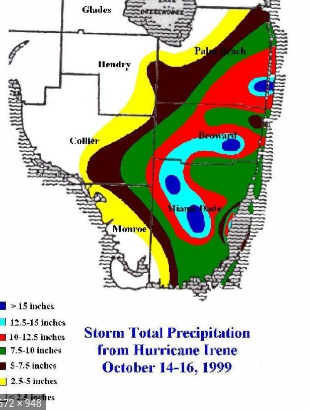 So there are many questions on TD 9 not to mention if this is Hermine or Ian, oh my gosh the drama is real.

What I want to talk about is that rather than focus on landfall in Florida, it might be important to focus on the impacts further down the road as some models take it up the spine of the Appalachians and that could lead to flooding across a large area. It may not happen, but it’s there in the end game runs that aren’t shown in the 5 day Cone.  So note the model shown below and way after landfall it’s tracking inland up across areas that could see flooding due to the terrain. 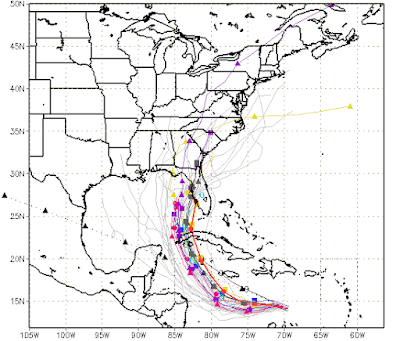 Our ever changing models.

Honing in on landfall maybe…

…yet where does it go after that?

How much more damage can it do after Florida? Could TD9 get this far North and stay inland?

From here it moves up into the Northeast.

After what happened with Ida after landfall in GOM.

It’s worth thinking on and remembering this is complex. 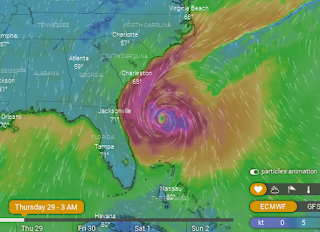 The EURO moves it faster and takes it offshore FL.

It ends up strong over the Gulfstream.

It does the Outer Banks

And then continues up towards NY and NE 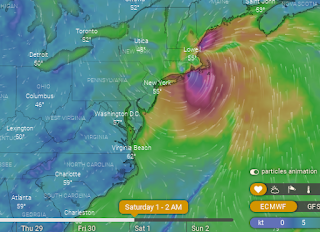 But it would be a huge track of terror if so.

A different track of terror than an inland track.

My point here is that it is not all about “landfall” as much as we worry on landfall and prepare for possible landfall, this storm now down by South America in the Caribbean trying to fight off shear and attain it’s name has a long way to go before any of us sleep if the general consensus of it developing into a Major Hurricane.

And before the Icon hits South Florida…

…it rams into Cuba. 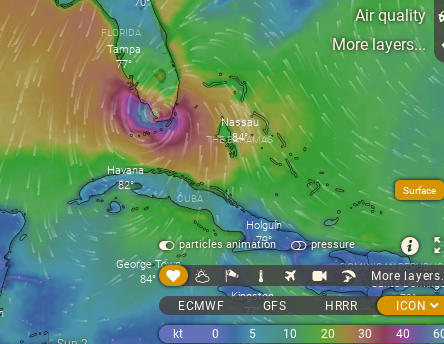 Again these wonderful images from www.windy.com are really only a photograph in time based on the current conditions and as the atmosphere is in disarray still from Fiona, it’s possible things change often between now and landfall.

Charley made landfall in August, usually it would not be expected to hook in to the right and yet it did. I wrote about this before it made landfall in the post shown below. How much shear will there be as the storm approaches the front? Yes, conditions seem perfect in the Caribbean but as hurricanes move North towards landfall shear often appears. There’s an ULL and they are tricky to forecast and can help ventilate it or tear it apart.

I want to see what this storm is like after it develops before posting thoughts on landfall beyond what I have said frequently here and online.

Easy money usually is on a landfall North of Tampa that will push water up into the bay often creating flooding and crossing the state further to the North. However, I can see the window for movement across Florida for a track up the Keys towards Miami.

The track Hermine or Ian takes towards landfall, the intensity and the speed will tell the second or third part of the story. It would be kinder if it simply does it’s thing in Florida after Cuba and goes out to sea but I doubt that is going to happen.

Here is what I wrote about Charley before landfall and I knew it was going to hook in and talked on it often online and in the blog, but the truth is we were close to landfall and it was fairly easy to read the possibility from satellite imagery for me but currently we have a tropical depression far to the South still near South America, we are not there yet. I was pretty sure Charley would go right of track.

Yet I could see other scenarios but my gut said it would hook in.

Again IF the 5 PM shows fast movement on the 4th and 5th day then it’s imperative to know what you need to do so you can do it fast if the forecast track moves towards your location.

I’ll update later with the 5 pm.

Just some thoughts on the longer term track and the possible impacts this storm can do way down the tropical road.